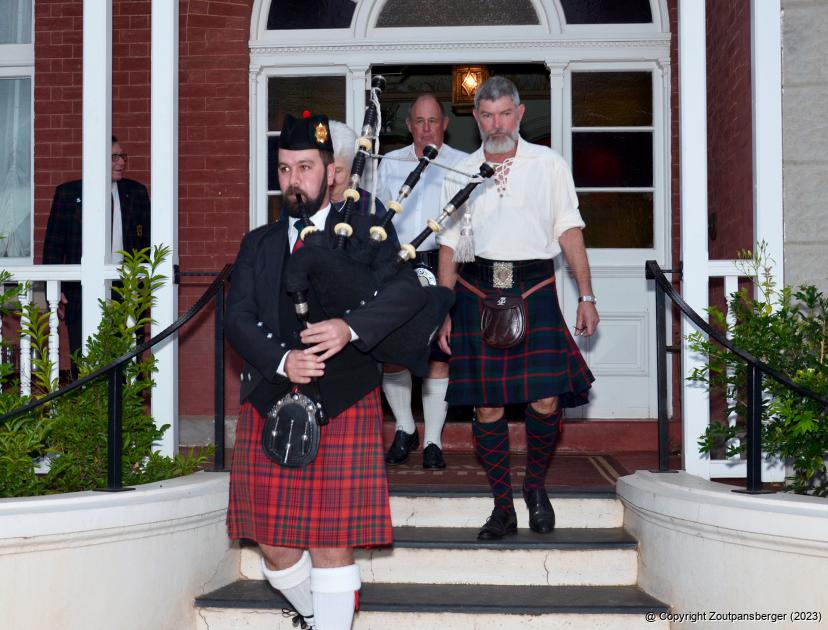 The 12th Duke being piped in at the beginning of the function.

History of Duke of Atholl now captured in a book

The gracious, Victorian double-storied original Cullinan home in Johannesburg, known as The View, is the headquarters of the Transvaal Scottish Regiment. It also serves as their regimental museum.

This was the setting for the launch of the book, The Duke from Haenertsburg – John Murray 11th Duke of Atholl, on Saturday, 18 March.

A more distinguished and appropriate venue could not have been found for the launch of the book that briefly covers both the 600-year existence of the previous 10 Dukes of Atholl and highlights in the life of the late John Murray and his forebears in South Africa.

The link between the Dukedom of Atholl and South Africa dates back to 1899, and the outbreak of the Anglo-Boer War. John, the Marquis of Tullibardine, later to become the eighth Duke of Atholl, together with his two brothers, served in this war. Bardie, as he was affectionately known from his title, distinguished himself by raising and organizing an irregular regiment that became known as the Scottish Horse, with himself as the commanding officer.

It was said that "the Scottish Horse deserve mention as a good example of thorough organisation, esprit de corps and an efficiency in the field which was destined to be put to many severe and deadly tests."

Those South Africans who did military service will remember this regiment as ‘The Jocks.’

Some 118 years later, this regiment, now known as the Transvaal Scottish, still exists and was host to the launch of the book that deals with the life of the first South African to become the Duke of Atholl!

Guests, friends and family from as far north as Louis Trichardt and Haenertsburg and from three generations back in time were present at the splendid function. The Dowager Duchess, Peggy Murray, her son Bruce (presently the 12th Duke), and relatives of the Murray Family were the regiment’s guests of honour. Bruce is a well-known resident and businessman of Louis Trichardt.

The atmosphere was set by numerous guests wearing the Murray tartan, as well as others in kilts of a wide range of Scottish Clans!

The Regimental Pipe and Drum band, which would have stood tall in Scotland, welcomed the guests and ‘piped’ the Dowager, the 12th Duke and their escorts into the reception hall. It was interesting that three members of the band were very accomplished young ladies, the shortest of them straining to remain upright whilst bravely bearing the massive bass drum in front of her!

A rather unique, and totally unplanned, feature was that both the bridesmaids at the wedding of John and Peggy Murray, namely Mary Drabbe (née Eastwood) and Georgia Norman (née Kingcaid-Smith), were among the guests at the launch. It is not at all common that both bridesmaids and bride of a wedding of some 60 years back should be at the same function – and all three looking just great!

A particularly special feature of the book launch was that Bruce Murray, the 12th Duke and presently colonel and commanding officer of the Atholl Highlanders in Scotland, was presented with medals due to him from his service in the SADF.

The Pro-Patria Medal, which was due to him in 1980; the General Service Medal, due in 1990; the De Wet Medal for long service in reserve forces, due to him in 1994, and the Unitas Medal, due in 1984, were presented to him by General Alan Luck.  Major Lyle Ferguson, who was largely instrumental in arranging for the issuing of the medals, read the citations to the guests.

In response to this presentation, Bruce remarked that the timing could not have been better and that receiving the medals at the launch of the book on his late father was extremely meaningful and emotional for him.

In true Scottish military tradition, excellent snacks and refreshments were served throughout the function as the Pipe Band continued to entertain the guests. Their final piece was the very moving national anthem, Flower of Scotland, in honour of the 12th Duke and the Dowager Duchess.

A lot of excited and positive comment concerning the book, as well as the actual function, was heard from the guests as well as from the organizers. It was an outstanding function, with many reunions of old school friends, mainly from Jeppe Boys and Girls High, as well as several ex-military and service men, and resulted in an impressive number of books being sold!

In order to introduce the book to Soutpansberg and Louis Trichardt friends ‘closer to home,’ it has been decided to hold a launch at Lalapanzi Hotel on Saturday, 22 April.

Guests, friends and family from as far north as Louis Trichardt and Haenertsburg and from three generations back in time were present at the splendid function.

A member of the Transvaal Scottish Pipe and Drum Band performing during the event.

The 12th Duke and Dowanger Duchess being piped in at the beginning of the function.

The 12th Duke, Bruce Murray, is presented with his medals by General Alan Luck.