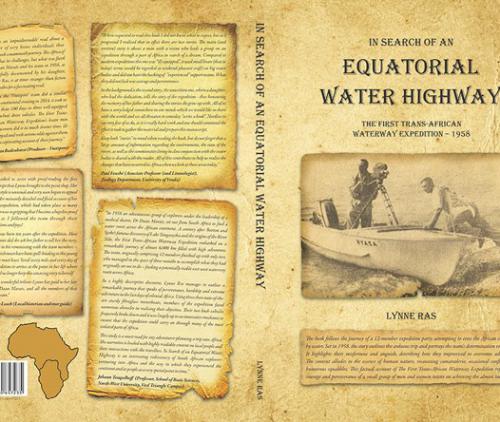 The book, entitled In search of an Equatorial Water Highway, follows the journey of a 12-member expedition party, led by Dr Marais, attempting to cross the African continent by water. Set in 1958, the story outlines the arduous trip and portrays the team’s determination to succeed.

A daughter’s tribute to an adventurous father

As a tribute to her late father, Dr Daan Marais' daughter Lynne Ras (née Marais) will be releasing a book detailing her father’s adventurous Trans-African Waterway Expedition, the first ever to be undertaken, this coming Friday.

The book, entitled In search of an Equatorial Water Highway, follows the journey of a 12-member expedition party, led by Dr Marais, attempting to cross the African continent by water. Set in 1958, the story outlines the arduous trip and portrays the team’s determination to succeed. It highlights their misfortune and anguish, describing how they improvised to overcome adversities. “The content alludes to the essence of human nature, recounting camaraderie, occasional conflicts and humorous squabbles. This factual account of the first trans-African waterway expedition reflects the courage and perseverance of a small group of men and women intent on achieving the almost impossible,” says author Lynne.

The Trans-African Waterway Expedition set out on 1 June 1958 from the port of Chinde, in the Zambezi estuary on the Indian Ocean, to pioneer and charter a 3,600 mile (5,794 km) inland journey via navigable bodies of water. They reached the Atlantic Ocean at Banana Point in the mouth of the Congo River on 23 August 1958.

Led by Dr Marais, the primary purpose of this expedition was to survey the route to determine the potential development of an equatorial water highway, providing arterial links for commerce and industry between the two oceans. The secondary objective was to study and collect scientific specimens, particularly within the fields of parasitology, ornithology and anthropology.

Representing diverse scientific disciplines, the 12-person team carried the approval of various organisations, including the Council for Scientific and Industrial Research (CSIR), the South African Institute for Medical Research (SAIMR) and an international body of scientists. Expedition members were requested to collect data and document significant findings en route, in exchange for assistance and technical support from the scientific establishments. They were also expected to provide biological and ethnical recordings and studies, as well as rare biological specimens, to museums and international research institutions.

The team returned with valuable scientific data and specimens, along with important acquisitions of primitive art forms obtained from all territories visited. The expedition took 84 days to complete and in total the waterborne party travelled 3,600 miles (5,794 km) between the port of Chinde on the Indian Ocean and Banana Point on the Atlantic Ocean. The boats were hauled overland for a distance of approximately 200 miles (322 km). They established that, by constructing 240 miles (386 km) of locks and canals between Lake Nyasa and Lake Tanganyika, a transcontinental passage for vessels of modest burden might be possible in the future. The group took close to 1,300 photographs and shot more than 30,000 feet (9,144 m) of film. The South African Academy for Science and Art awarded the prestigious Eugène Nielen Marais Commemorative Medal to Daan in 1995, in honour of the expedition.

The late Dr Marais, a well-known resident of the Soutpansberg, passed away on 21 August 2012 in the Limpopo Mediclinic in Polokwane. Aged 83, Marais died from heart failure, five days after undergoing hip surgery. The launch of the book on Friday, 21 August, will not only coincide with the commemoration of his death in 2012, but also with the completion of the expedition on 23 August 1958. “I often put myself in their shoes and imagine how difficult it must have been without modern-day technology – no ATMs, Internet, GPS or cellular and satellite phones. Today’s vehicles are more advanced and travel conditions have improved dramatically,” says Lynne.

The book will be available at Leach Printers in Louis Trichardt from Friday, 21 August. Alternatively, phone author Lynne at Tel 083 302 1408, or send her an email at lynne.ras68@gmail.com