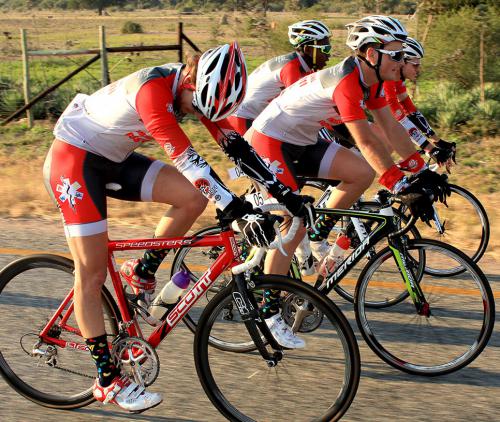 Local boys a force to be reckoned with

Louis Trichardt’s first ever professional team to compete in the gruelling 175km Kremetart One-Day Stage Race, proved to be a force to be reckoned with.

The past weekend, Team Tac-Pulse faced some of the top names on the South African racing scene. “The guys proved that they can become mega-contenders,” said team manager Stanley Thompson after the race.

The idea of entering a local team was adopted by the newly established Soutpansberg Cycling Club to promote the aims and objectives of Soutpansberg Youth Cycling – a newly formed club to promote the sport of cycling among the region’s youth. This was a goal, said Thompson, that Team Tac-Pulse achieved with confidence, even though they did not secure a stage win.

Days before the race, the team was informed that they would be split from their team captain, because each team member had to compete in his respective age category.

Richard, being under the age of 16, was not allowed to compete in the 175km race. Team captain Rick had to compete in the sub-veteran category of the race and could only catch up with his team between the various stages. Kombo, Jandré, Marco and Gerhart competed in the elite men’s category. Douglas competed in the men's U/18 category but was never too far behind his team mates in the elite bunch.

All five of them proved their mettle and kept up with the elite peloton, which in itself is an enormous feat for newcomers in such a big race.

During the first stage, crossing the Soutpansberg and completing the 54km to Waterpoort, Marco, Kombo, Gerhart and Jandré finished together, 11 minutes behind Bradley Potgieter ( the overall winner).

At Waterpoort, the warmer temperature also helped to rid the team of muscles that cramped because of the cold temperature at the start. The following stage, which is considered a fast 48km, despite the slow climb into Vivo, saw Kombo finishing ninth among the top 10, only four minutes behind Herman Fouché, who won the second stage. Gerhart followed 10 seconds after Kombo, with Marco, Jandré and Douglas five, 15 and 18 minutes respectively behind Herman.

The infamous headwinds on the 52km stretch of stage 3 and the steep uphill finish at Schoemansdal, however, really put the team to the test. Kombo and Gerhart came in fighting for a spot among the top 10. In the end, Kombo dropped two places from his previous stage placing and finished 11th overall, two minutes behind the first elite rider, Dusty Day. Gerhart took the 12th position, an amazing three hundredths of a second difference between him and Kombo. They were followed by Marco, Douglas and Jandré, who came in three, 25 and 26 minutes behind Dusty.

Following Otto’s Hoogte in the final stage, Kombo and Marco made short work of the dreaded uphill climb and took the last two spots among the top 10 finishers in the stage, three minutes behind Bradley.

Richard performed exceptionally well in the 70km road race. He finished in a time of 1:59:53.25, ending second in his age category and overall fourth in the race.

Following the team’s weekend accolades, Thompson said that they had high hopes for local cycling and development. “I think the team’s performance over the weekend bodes well for cycling, and especially for Louis Trichardt.” What is more, said Thompson, is that three of the team’s cyclists are also part of Louis Trichardt High School’s cycling team, which could lead to the school's taking top honours in the upcoming Schools Mountain Bike XCO Championships.

Click to view a video clip or our photo gallery of the action on the day.