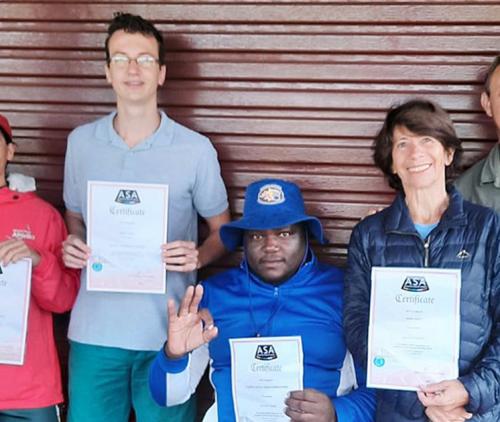 The five attended the ASA training course from 14 to 16 January at Ellisras High School. The stiff course was attended by more than 70 aspirant coaches and was run by Fastfeet Development, with top South African coaches presenting the course.

All five IsAbility members passed the course and are now certified Level 1 ASA coaches. Importantly, Vhumbani Masakona is one of the IsAbility Club’s wheelchair athletes who medalled at national level the last two years. He is now embarking on a coaching career, and he is really an asset to the club. Paralympic medallist Sheryl James, the IsAbility Club’s development officer, is also continuing her athletics career but is starting to work with sprint athletes from the Rivoni School for the Blind and other athletes to develop them at the same time. The other members who did the course were Daniel Joubert, Sandy James and Lourens Bothes.

IsAbility is a sports club for both para-athletes and able-bodied athletes. “We are realising more and more that a lot of learners who are doing home schooling or attending schools where sport is not emphasised are missing out on opportunities to compete and develop their athletics talents. If such learners affiliate with a Limpopo Athletics (LIMA)-affiliated club (which we are), then they can compete at LIMA league events under our club's name and this also enables them to go to Limpopo Provincial Athletic champs (we are talking able-bodied now) and ultimately SAs if they qualify,” said IsAbility spokesperson Sandy James. James said the athletes did not necessarily have to be coached by one of their club coaches. “Our affiliation is open for any local or rural school’s athletes or adults. IsAbility’s annual affiliation for juniors is only R150, which includes their permanent annual LIMA/ASA athletics license. For adults it's R190 if they compete in LIMA events. Without the license, the affiliation for all categories of para-athletes is R100,” said James.