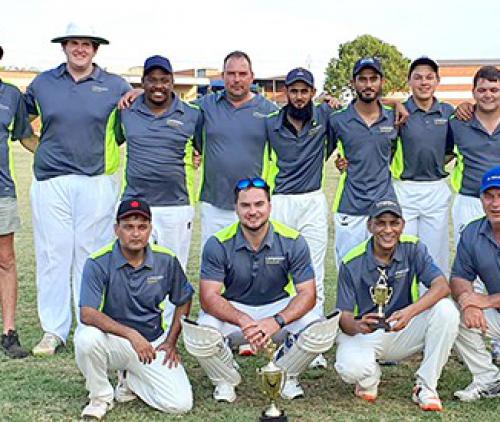 Limpopo Dairy’s team only needed 8.2 overs to clinch victory in the highly anticipated final of the Louis Trichardt Cricket Clubs’ T20-league. Their win was greatly due to batsman Dewald Joubert’s innings, in which he literally destroyed the NTT Vikings’ bowling attack.

The match between Limpopo and the NTT Toyota Vikings took place at the Louis Trichardt Oval on Saturday, 6 November.

The NTT Vikings batted first and struggled their way to 113 run for the loss of eight wickets in their allotted 20 overs. The top performer with the bat was Zander Volgraaff, in at number six, who knocked 43 runs from 45 balls in an innings that included seven fours. Opener Gysbert Guillaume, who has been in impressive form with the bat the whole series, only managed 12 runs from 10 balls before losing his wicket rather cheaply off the bowling of Vimal Shah. Shah also toppled the wicket of fellow opener Craig Viljoen, who managed to only score eight runs from 13 balls. From there on the going was slow, with Warno Smits managing 11 runs from 10 balls before Volgraaff came to the crease. The only other NTT Vikings batsman who managed double figures was Waldo van Deemter, in at seven, who contributed 21 run from 23 balls.

Limpopo’s batsmen wasted no time at the crease with a quick 15 runs from six balls, which included three fours, from opener Nimesh Watekar and 22 runs from 17 balls (also including three fours) from AJ Fourie, in at number two. Hussain Patel, in at number three, was unlucky to be bowled without contributing anything to the score board, but Limpopo’s hope of victory was restored by Dewald Joubert, who literally took NTT Vikings’ bowling attack to pieces. He finished on a not-out strike rate of 280,77, hitting his blistering 73 runs from only 26 balls, which included four fours and eight sixes! Joubert’s innings easily steered Limpopo to victory with a final score of 115 for the loss of only Watekar and Patel, whose wickets fell to Morné Olwage (one for 22 runs in three overs) and Bielie van den Berg (one for 37 runs in two overs).

The club honoured the top players in the league immediately after the final at the prize-giving function. Gysbert Guillaume walked away with the trophy as best batsman, while Vimal Shah received the trophy for best bowler. Of course the trophy for the winning team was received by Limpopo Team captain AJ Fourie.