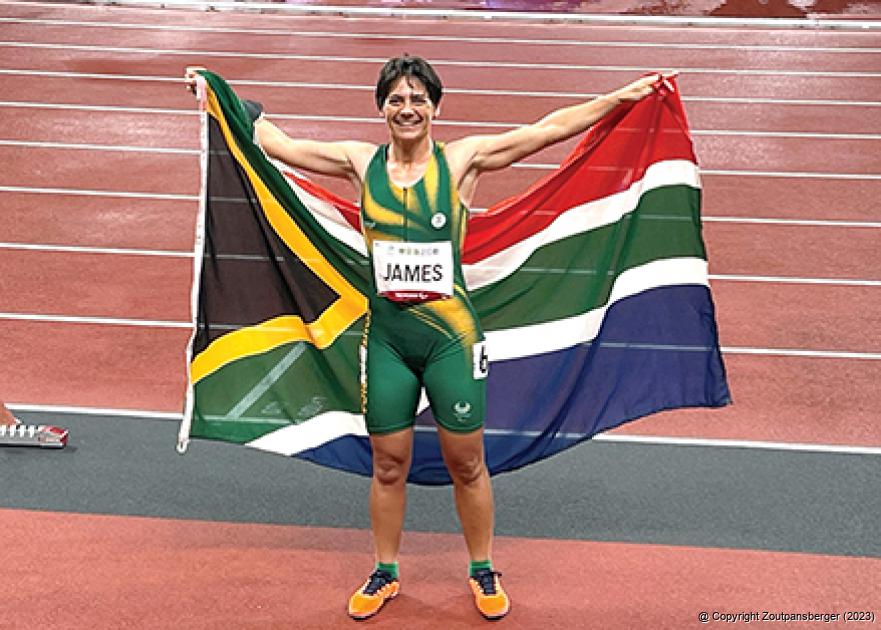 A proud moment for Louis Trichardt Paralympic star Sheryl James shortly after winning bronze in the 400m T37 race for women at the Tokyo 2020 Summer Paralympic Games in Japan on Tuesday. Photo supplied.

Louis Trichardt para-athlete Sheryl James did South Africa and her hometown proud on Tuesday by winning a bronze medal in the 400m T37 race for women at the Tokyo 2020 Summer Paralympic Games. “To become an Olympian is an exceptional achievement, BUT to become an Olympian medal winner becomes a historic achievement never to be erased! So proud of you, Sheryl James, whose name is now part of Olympic history,” remarked her coach and fellow Louis Trichardt resident Gideon Joubert shortly after the race.

Sheryl forms part of the 34-member Paralympic South African team currently competing at the games. The build-up to Sheryl’s winning bronze started on Friday, 27 August, when she just missed out on a podium place in the 200m race for T37 women. She finished fourth in the event in a lightning-fast time of 27.57 seconds, a fraction of a second slower than French athlete Mandy Francois-Elie in third place in 27.34 seconds and Fenfen Jiang from China in second place in 27.33 seconds. The overall winner of the event was Xlaoyan Wen, also from China, in a blistering time of 26.58 seconds. Despite her fourth place, Sheryl set a new Africa record in the event just hours after smashing the previous new Africa record of 27.73 seconds in the same event during the 200m heats.

This is no small feat for the 35-year-old Louis Trichardt athlete. “There are a lot of obstacles and miracles that Sheryl encountered along the way ... but as an athlete from Louis Trichardt, I think the community will be interested to know that this is an athlete who trained mostly on a grass track because there is no tartan track in Louis Trichardt,” said mom Sandy. For the past two years, coach Gideon coached her every day, and more recently, they would travel to Polokwane to have a session on tartan. Mom Sandy and husband Chris could not be prouder of their daughter. Unfortunately, they could not join their daughter in Japan because of the Covid-19 restrictions and had to stay home.

Another of the obstacles that Sheryl had to face was a major injury earlier this year that almost cost her her Paralympic dream. In April this year, she sustained a very serious tendon tear in her left ankle. Sheryl went to Pretoria for scans and an MRI and was in a moonboot for a month and off training for about six weeks. “My brother, who is a radiologist, told me that similar injuries are very often career ending or take ages to recover from,” said Sandy.

But Sheryl came back to Louis Trichardt and since she was not allowed to put weight on her leg, Sheryl started swimming to keep fit. “She arranged with Yolande from the pool at the gym at the high school, that she [Sheryl] would take responsibility for keeping the pool heated throughout winter. Yolande usually stops heating the pool in winter. The interesting fact is that the pool is heated the old-fashioned way ... with a ‘donkey’. So, this meant Sheryl had to arrange for piles and piles of wood to be cut and transported to the pool for months, from the end of April until end of July. This was a joint effort from friends, her brother Gary, our staff Simon and Matodzi and others, and Sheryl paid Gift at the pool to keep stoking the fire daily,” said Sandy.

On weekends, Sheryl would go in and stoke the fire herself and coach Gideon and physiotherapist Elmien van der Goot would carry on with Sheryl’s rehab programme in the heated pool.  “It was this swimming and God's grace that brought about her recovery, to the amazement of medical minds,” said Sandy, adding that pure grit and determination, as well as community involvement, had also contributed to her quick recovery. “When we feel we do not have resources, there is always a plan to be made if we put our mind to it. As parents and family, we are super proud of Sheryl and the whole team that brought her to this and thankful to be a part of an amazing community,” said Sandy.

The always smiling Sheryl is very humble about her achievement. “It’s been an incredible privilege representing South Africa at the Paralympics. And yes, it has been nothing short of miraculous just getting here. I couldn’t have done it without everyone back home. We have enjoyed the Lord’s great blessing in the team with a great spirit among the athletes and management alike,” said Sheryl in a WhatsApp message to the Zoutpansberger.

With her tongue clenched between her teeth, something that has become somewhat of a trademark for her, Sheryl is enjoying every second at the Paralympics. “I had good fun running my 200s, running probably unexpected personal bests in both heats and finals. It truly is something beyond words when you get to run among those young ladies with so much talent!” said Sheryl.

But for Sheryl, the 400m was something else. “Warming up in the rain, I gave it my best shot and hit the invisible wall as I did in my 200. To watch those girls edge ever so ahead of me to the finish ... eish!” said Sheryl.

Sheryl’s final event is the T37 100m race for women on 2 September. This after she qualified for the event during the first heat on Wednesday afternoon, finishing third in a time of 13,58 seconds - a new personal best for her. “About the 100m, she is just going to give it all she has left in her legs. At least it's over quickly,” said Sandy. Sheryl ended up finishing fifth in the event.

Both Sandy and Sheryl are immensely involved with the IsAbility Sports Club Limpopo. The aim of the club is to, among other things, give disabled people the means to compete in sports. The duo are the driving force behind the club and support programmes such as the Jumping Kids initiative. Most recently, they assisted the young Vhutuhawe Nemutandani, a double leg amputee, to move to the Emmanuel Christian School outside Louis Trichardt for a better education and access to sport.

“I’m truly thankful that the Lord allowed me this opportunity to do what I love, and I look forward to coming home and seeing the next Olympian and Paralympian discovered and developed in our own back yard ...  the beautiful Limpopo Valley,” said Sheryl.