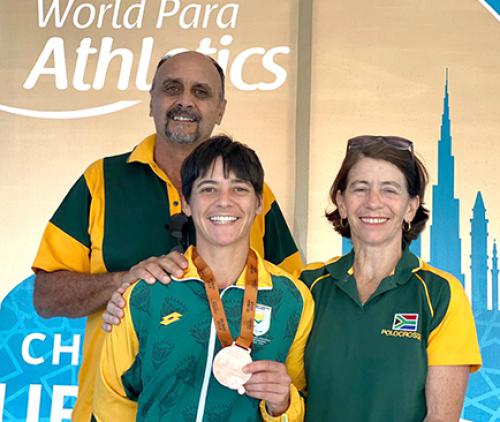 Local para-athlete Sheryl James did not only do the Soutpansberg proud, but the whole of South Africa by securing a bronze medal for the country during the World Para-Athletics Championships that took place in Dubai from 7 to 15 November.

Sheryl formed part of the squad of 35 athletes and officials who flew the South African flag during this year’s World Para-Athletics Championships, competing in the T37 category for athletes with coordination impairments.

Sheryl is hemiplegic, with impaired muscle functionality on the right side of her body. She was born cerebral palsied because of a lack of oxygen supply to a small spot on her brain. She has, however, not allowed this physical challenge to prevent her from participating in strenuous sporting disciplines, and her vision is to help enable others who have any form of physical or emotional challenge to realize that they are able to reach far higher goals than society or they themselves may have given them hope for.

Sheryl ran a personal best time of 01:05.34 in the T37 400m heat for women during the World Champs. She followed this up with a time of 1:06.06 in the final of the event, securing South Africa a bronze medal.

According to Sheryl’s parents, Chris and Sandy, who accompanied Sheryl to the World Championships, the team physio, doctors and managers are very excited about Sheryl’s going to her next event in Tokyo and beyond. “I think she is exhausted. Being such a newbie at all this and still managing to keep her composure all the time … she is my hero. Thanks to everyone who has been there for her all the way. All glory to the Lord for his Grace and favour that has enabled her to do this,” said Sandy.

This year alone, Sheryl was nominated as a finalist in the Gsport Awards for women that took place at the Wanderers Club in Johannesburg on 31 August. Sheryl was one of three finalists in the category for athlete of the year with disability. Her sprinting career only started last year in about September. She got involved in parasport and has done very well, with a couple of gold medals in Dubai and Sao Paulo running the 100m, 200m and 400m. Before that, she ran long distances and did the Comrades three times.