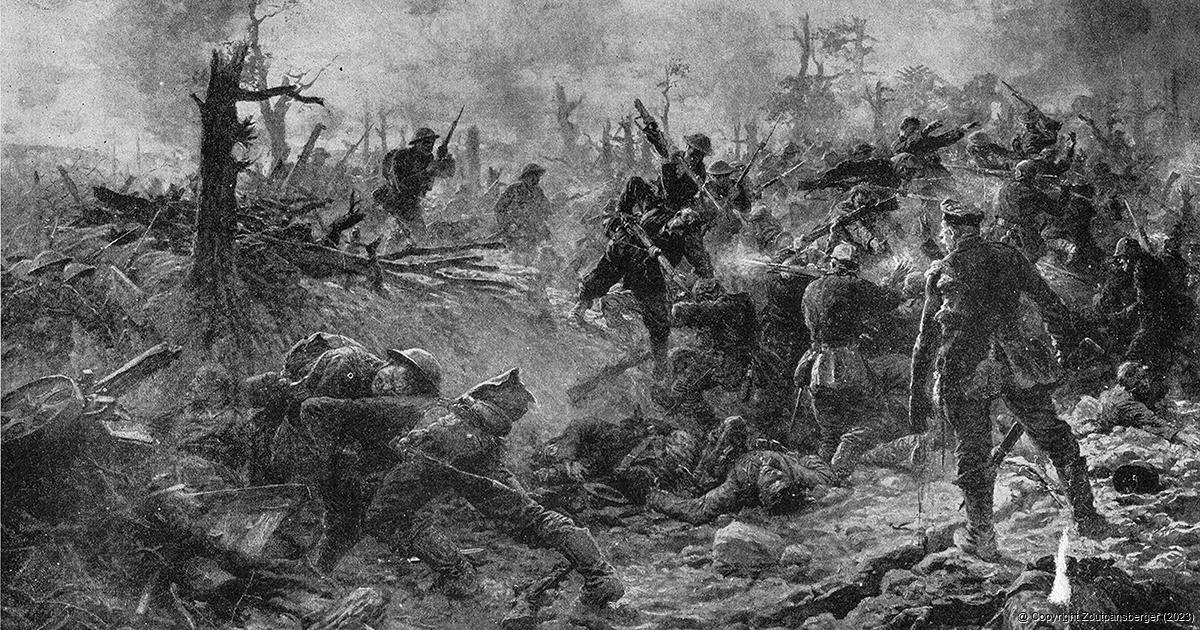 A military artist's drawing of the Battle of Delville Wood, July 1916.

July 2022 marks the 106th anniversary of the Battle of the Somme, one of the bloodiest battles in human history. Between 1 July and 18 November 1916, more than one million men were wounded or killed on the banks of the river Somme in France. Among the soldiers killed and injured were more than 2 400 South Africans, who fought for control over a small piece of land in the northeast of France, called Delville Wood.

This Sunday, 17 July, at 11:00, a special service will be held at the Moths’ Turbi Hills Shell hole to commemorate Delville Wood and to pay tribute to the South African soldiers who lost their lives during his war.

The Battle of the Somme is often described as an example of supreme sacrifice and heroism but is also a very controversial part of our war history, with some describing it as a senseless waste of human lives. The first day of the battle marked the worst day in the history of the British army, with more than 57 000 casualties. The German second army also suffered some 12 000 losses.

The battle of the Somme was intended to be a decisive breakthrough for the Allied Forces against the German Army, but things did not turn out that way. The fighting continued for just over four months, and, in the end, the Allied Forces gained some five miles but could not break through the German lines. It did, however, lay the foundation for the battles that followed and, for the first time, weapons such as tanks were introduced to warfare.

The South African influence on the battle was significant. On 15 July 1916, the second, third and fourth Battalions of the 1st South African Infantry Brigade were sent into Delville Wood to clear it of German troops and consolidate the front line. The fighting was fierce and soon the first SAI Battalion was also sent in, making for a total of 3 032 men and 123 officers.

The soldiers entering the wood were exposed to gunfire from all sides and the casualties were severe. One regiment, the fourth Battalion, entered the wood with 699 men. A week later, only four officers and 38 men marched out. Overall, only 755 officers and men of the entire brigade survived. The remaining 2 400 men were either killed, wounded, or missing.

The scenes that played out in the “Devil’s Wood” made a lasting impression on the lives of hundreds of thousands of people. One such a person was the South African-born writer, JRR Tolkien. Tolkien, at that stage a 24-year-old officer in the British Army, served as a signaller and participated in the bloody battle for Thiepval Ridge, the terrifying attacks on the Schwaben Redoubt and the capture of Regina Trench.

Tolkien later stated that much of the inspiration for the battles in the Lord of the Rings trilogy stemmed from the war scenes during the Battle of the Somme. Tolkien was inspired by the great potential, bravery, and hardiness he saw in the ordinary, low-ranked-citizen soldiers that fought in the battle.

On 17 July, a number of wreaths will be laid at the Turbi Hills Shell hole in Burger Street to commemorate the battle of Delville Wood. Local residents who had family members or close friends who were involved in this battle are welcome to participate in the event. For more information, Old Bill Ben Wolff can be contacted at 084 368 7045.