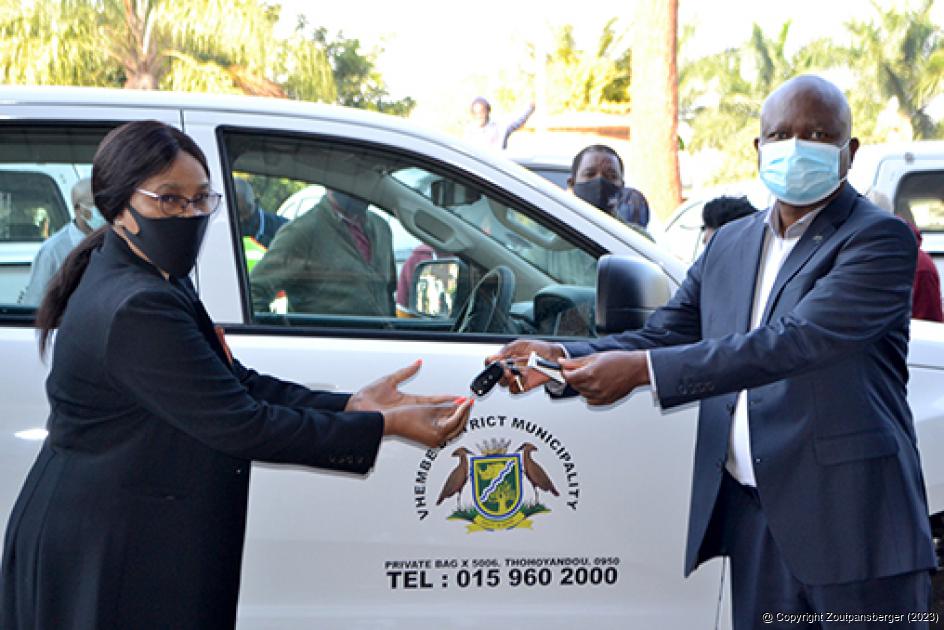 Executive mayor of the Vhembe District Municipality Dowelani Nenguda (right) hands the keys of the new fleet over to the municipal manager of VDM, Ms Sylvia Ndou. Photo: Silas Nduvheni.

The Vhembe District Municipality will no longer have an excuse for not being able to attend to problems and complaints because of a shortage of vehicles. The municipality received 19 brand-new vehicles to the value of R8,7 million on 25 May, to be used specifically and solely for the purpose of water service delivery within the municipality.

The executive mayor of Vhembe, Cllr Dowelani Nenguda, joined by other councillors and workers, handed over the new fleet to the VDM on Tuesday at the district municipality’s square in Thohoyandou.

The 19 vehicles are supplementing the existing vehicles being used by municipal workers. “Workers complained that they didn’t have enough vehicles to tackle water challenges and blockages when they were called. Now they have enough,” he said.

He urged the drivers from the planning and technical services departments, who will be using these vehicles, to use them for the delivering and maintaining of water services and repairing of blocked sewerage systems, and nothing else.

“We call on the communities around the Vhembe District to report any form of reckless driving and use of these vehicles that is not for the purpose they were bought for. The number to call is 015 960 2000. We will also impound vehicles that are not used solely for doing the work it was supposed to do, because it is the people’s tax money and we cannot allow things that are not done the right way,” said Nenguda.

Eight tractors, to the value of R9,4 million, were also received to be used on a booking system by local farmers for ploughing purposes in fields and orchards.

“We are the food basket of the Limpopo Province, and we take farming seriously. We understand that the agricultural food production from our farmers in the district will increase with the help of these tractors,” Nenguda said.

He added that, as more vehicles for rendering water services were now available, they might possibly also employ more people very soon.

Cllr Thina Mbedzi, portfolio head of technical services in the VDM, was ecstatic about the new fleet. “Water is life; our communities cannot survive without water. The new fleet will definitely reduce the pressure on workers in the district municipality who complained about the vehicle shortage whenever they were called out to attend to water challenges and blockages,” said Mbedzi.