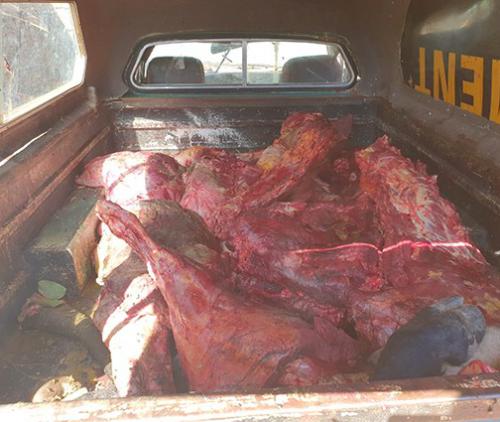 The police in Musina have arrested a 43-year-old police sergeant, along with two alleged accomplices (aged 28 and 40), for stock theft and the possession of suspected stolen cattle meat.

“On 21 May during the day, members of the South African Police Service received information from members of the community about suspected stolen cattle meat being off-loaded in one of the houses at Mushenguville, a residential area on the outskirts of Musina. The police reacted swiftly and on arrival they found a bakkie loaded with cattle meat, parked inside the yard belonging to a police sergeant,” said provincial police spokesperson Col Moatshe Ngoepe. The sergeant is attached to the Makhado SAPS in Louis Trichardt.

According to Ngoepe, preliminary police investigations revealed that the meat came from stolen livestock. The three suspects were immediately arrested. The bakkie still loaded with the meat was also seized.

By the time of going to press, the police had yet to confirm if any of the suspects had appeared in court yet. They also had to confirm from where the meat was possibly stolen.

In the meantime the provincial police commissioner, Lieutenant General Nneke Ledwaba, has expressed his disappointment in the alleged involvement of this member in criminal activities. He warned police members to desist from engaging in any criminal activity as the law will equally be applied harshly, regardless of their status.