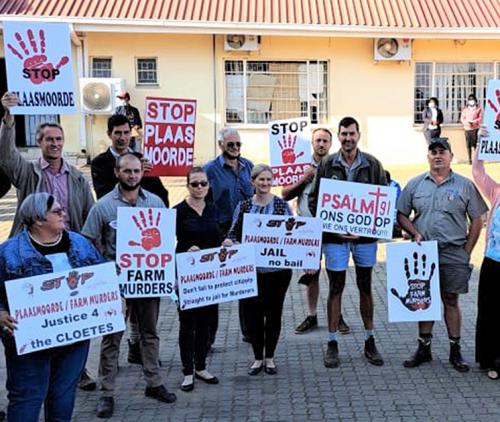 Outside court, famers waved placards. Mr Fanie Havinga, representing the farmers and the grieving family, said they were there for their voices to be heard.

'Do not give them bail,' say Levubu farmers

The Vuwani Magistrate’s Court was once again filled to capacity on Wednesday by farmers from the Levubu area. This was during the second court appearance of the two young men, Mukhethwa Goodman Magoma (19) and Engetelo Advice Sambo (19), accused of murdering the elderly Louis Cloete (71) and his wife Ina (65) on 20 April.

The Cloete couple were allegedly confronted by the two inside their farmhouse on that fateful Wednesday afternoon. The two ransacked the farmhouse, taking items, among them firearms, and loading these into the couple’s bakkie. Before they left, they set the farmhouse on fire.

The smoke from the house attracted the attention of a Levubu Farm Watch member, who rushed to the scene. Once the fire was eventually brough under control, the Cloete couple’s bodies were found buries under some debris, burnt beyond recognition. Both had been tied up.

As the farm-watch member arrived on the scene, two suspects were seen fleeing from the scene, leaving behind the Cloete couple’s bakkie and the stolen items inside and on the back of it. Magoma and Sambo were arrested less than 24 hours after the brutal murder.

Outside court, famers waved placards with messages written on them. Mr Fanie Havinga, representing the farmers and the grieving family, said they were there for their voices to be heard. "We are here as concerned farmers to support the family. We are happy as to how the case is progressing, but we want to tell this court we will not allow a situation where the accused could be granted bail. The community does not want to see them, and as farmers we cannot guarantee their safety. People are angry out there," he said.

The two accused will remain in custody until their next court appearance.

Elmon Tshikhudo started off as a photographer. He developed an interest in writing and started submitting articles to local as well as national publications. He became part of the Limpopo Mirror family in 2005 and was a permanent part of the news team until 2019.