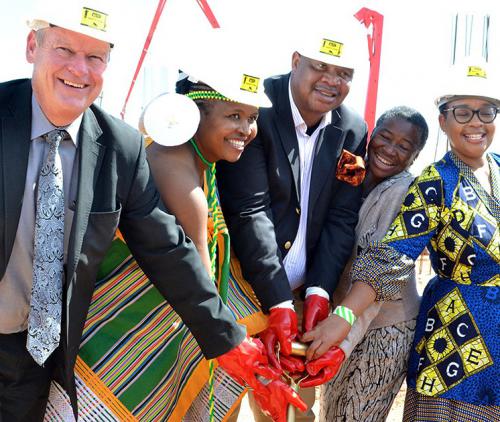 Photographed at the sod-turning ceremony are, from left to right, the operations director of Premier Hotels, Richard Bray, Ms Tsakani Masia, the MEC for LEDET, Thabo Mokone, Thulamela Mayor Sarah Rambuda and the head of tourism and services at the IDC, Moseketse Mpeta. Photo: Silas Nduvheni.

Thohoyandou will soon boast with one of the biggest and most luxurious hotels in the province. The sod-turning ceremony for the four-star Premier Hotel took place last Friday at Maniini. Once finished, the hotel will provide 120 rooms, a conference space that can host up to 450 delegates, a business suite, a bar and restaurant, an outdoor pool and a gym facility.

The hotel is the brainchild of Ms Tsakani Masia, CEO of the African Century Group. She partnered with Premier Hotels & Resorts, one of the leading hospitality companies in the country. Since its inception in 1991, Premier Hotels’ portfolio has grown to encompass 24 hotels and resorts throughout the country.

“When we were approached by the African Century Group, we never thought twice. After going through the profile of the owner, Ms Tsakani Masia, and after listening to her vision, we were convinced that in her, we had found a partner equal to the task,” said Samuel Nassimov, MD of Premier Hotels.

Construction of the four-star hotel in Thohoyandou has already started and if all goes according to plan, it will be completed in May next year. The construction work will be handled by Nakiseni Business Enterprise, a sister company of African Century.

The project is expected to create 480 jobs during the construction phase. After completion, the hotel will provide 85 permanent jobs as well as 30 to 40 part-time jobs. “Not only does this development create jobs and livelihoods, but it also plays its part in changing this environment that I call home,” said Ms Masia.

The new hotel will be developed on the north-eastern edge of Thohoyandou and will be a modern design, with a touch of African flair, very similar to the OR Tambo hotel. The facade will be stone as opposed to brick, with numerous environmentally friendly aspects.

During Friday’s sod-turning ceremony, the MEC for Environmental Affairs, Economic Development and Tourism, Thabo Mokone, said the hotel would create more tourism opportunities and would also have an economic spin-off for the region.

Mokone said that a need existed for such a facility, especially considering the proximity to tourist attractions such as the Kruger National Park. The Vhembe region also boasts three major soccer teams, which brings along a demand for accommodation when matches are played in Thohoyandou.

The project is financed by the Industrial Development Corporation (IDC). The IDC’s Head of Tourism and Services, Moseketse Mpeta, said that they were very excited about this hotel development, and they were proud to be the funding partner.

The mayor of Thulamela Municipality, Cllr Sarah Rambuda, said that the development of the new hotel came at a very opportune moment. She said that the municipality was aiming towards achieving city status by 2030.

When speaking during the sod-turning ceremony, CEO Ms Tsakani Masia became very emotional. “It has always been my dream as businesswoman and as a historically disadvantaged woman to make a meaningful contribution to the economy,” she said.

Masia said that the dream to launch such a project started many years ago, while she was still working at Standard Bank. “It has been through determination and uncompromising hard work, guided by strong moral values, that I have made it this far,” she said. She thanked the people who had played a big role in her life and enabled much of her success.

Ms Masia’s husband, Thovhele Nthumeni Masia, gave a final word of thanks and expressed his confidence that the hotel would herald a new wave of development in Thohoyandou.