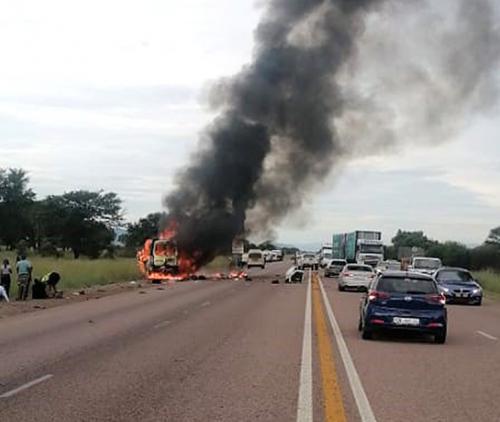 The scene of the horror-crash that claimed the lives of 17 people on the N1 outside Mookgophong on 12 January. Photo supplied.

The Minister of Transport, Mr Fikile Mbalula, released the 2021 festive season fatality statistics on Tuesday, with Limpopo recording both the deadliest crash and the “fastest” motorist for the period.

“Over this past festive season, we saw some of the most heart-wrenching crashes claiming many lives in a single crash. On 12 January, a head-on collision claimed 17 lives and injured eight on the N1 near Mookgophong, Limpopo. The bus driver lost his life along with the passengers due to the bus catching fire that entrapped them inside immediately after impact,” Mbalula said in his speech delivered at the Grasmere Toll Plaza. He added that he found the fact that more fatalities occurred per crash this year, with passenger fatalities constituting 38% of fatalities, compared to the 32% of the previous period, very alarming.

Regarding speed, Mbalula said a total of 605 drivers had been arrested for driving at excessive speeds of between 190 km per hour to well above 220 km per hour. The speedster travelling at the highest speed was arrested in Limpopo, travelling at 225 km an hour.

A total of 1 685 fatalities were recorded over this festive period, which is a 14% increase on the previous period. The main causes of road fatalities during this period were jaywalking, speeding, wet or slippery road surfaces, overtaking across barrier lines, and poor visibility.

As for law enforcement, 651 roadblocks were conducted throughout the country, and they issued 264 690 fines for various traffic offences. Of particular interest is that 21 431 of these fines were for drivers who failed to wear seatbelts while 22 766 were for people who were driving without licences. “It is our intention to ensure that the law bites and driving on our roads without a driving licence carries a heavy penalty, otherwise the mooted points demerit system will make no difference in driver behaviour,” Mbalula said, later stating that the government would appeal the recent ruling of the Pretoria High Court declaring the AARTO Act unconstitutional and invalid.