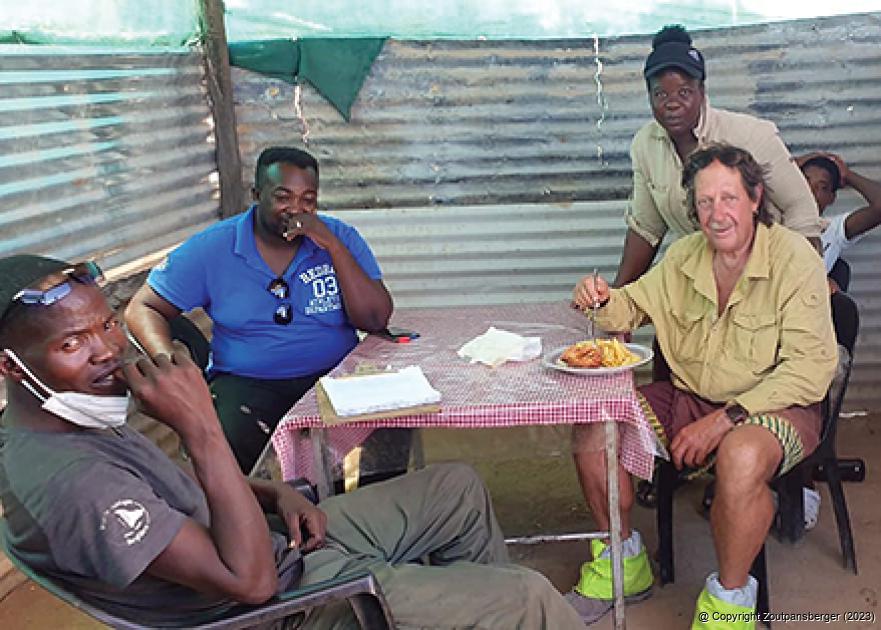 Chicken and chips for lunch at a traditional 'restaurant' in Okangwati. Photo: Dave van Graan.

Despite murderously steep hills, walking in scorching temperatures of 40°C+ and dealing with the hiker’s worst nightmare - the ever-present, pestering little mopane bees that will fly into every exposed orifice (nose, eyes, mouth, ears) - Dave van Graan (Louis Trichardt’s own ‘Chuck Norris’) seems to be making good progress on his 800km walkabout through Namibia to raise awareness for Desert Lion Conservation.

On his first day (21 November), starting from the Epupa Falls, Dave completed 20km. This, he says, was a great challenge, pulling his 80kg cart uphill out of the Kunene River valley. He admits that the thought had crossed his mind at one point that he might not be able to make it, but of course he did.

On his second day, he completed 25km, as on the third day, and by Thursday, 25 November, Dave had completed his first 100km.

At Okangwati, he stopped at a very traditional “restaurant” (which is really nothing but a neat zinc shack) to treat himself to a tasty lunch of chicken and chips – “Kaokoland style” as he put it. From there he headed south. Although he was met with more steep hills over this next 110km stretch to Opuwo, he managed to complete an average of 25.7km per day.

After seven days of hard walking, Dave arrived at Kaoko Mopane Lodge & Campsite (just short of Opuwo) - hot, dusty, thirsty and in desperate need of a good rest. When he continued (much more refreshed) the next morning, he did so with high praise and appreciation for the owners of the lodge for their warm hospitality.

On arrival in Opuwo, he stopped to buy his last food supplies for the journey as he will not pass another shop ahead, so the Bart Mobile (his cart) is loaded to capacity. He says he has deviated a little from his scheduled route to one he has not taken before. The route he planned on taking, he says, was just too tough and steep to walk, making him too tired, whereas the route he is on now is more level.

By the afternoon of Tuesday, 30 November, Dave was about 20km past Opuwo. On 1 December, he passed the 200km mark, which means that he now only has 600km more to go before he reaches his goal - Henties Bay.