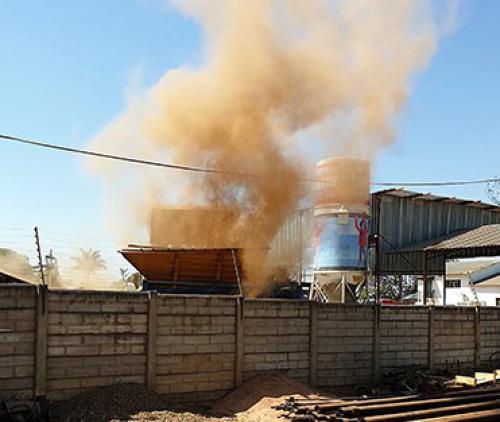 Dust billowing from the stone crusher in Burger Street, Louis Trichardt. Neighbours say they have had enough of this, but the owner of the crusher argues that he is allowed to operate as the regulations relating to his first obtaining a Special Consent from the municipality to operate his crusher do not apply to him. Photos supplied.

Crusher owner says by-law does not apply to him

Tension is mounting between neighbouring businesses in the industrial area of Louis Trichardt regarding “dust and noise” pollution caused by a company operating a stone crusher. This activity is argued to be illegal as the necessary “Special Consent” was not obtained from the Makhado Municipally. In response, however, the owner of the crusher said that he did not need this special consent as the regulation requiring such consent was not applicable to him.

The company in question is Bunda’s Logistics. Since the company was registered in 2015, it has been operating a stone crusher from its premises at 16 B Burger Street - a property zoned as Industrial 2.

Although the area has been zoned for industrial purposes, some businesses in the immediate surrounding area have since started to ask questions whether the company is allowed to operate a stone crusher, specifically in light of the dust and noise pollution it causes. These complaints reached the Zoutpansberger, and we decided to investigate.

Over the past couple of years, the issue of correct zoning has led to lots of bad blood between neighbours. This newspaper has ran numerous articles on the issue of zoning, especially regarding businesses operated from premises in residential areas. To date, some of these businesses are still in operation. Most recently, in August this year, a resident of Mimosa Street uploaded a video of his neighbour operating a warehouse from a residential property. These activities have caused huge traffic jams in the streets, as well as damage to the road and sidewalks, with huge interlink trucks continuously loading or off-loading goods at the premises. “Now, whom do you complain to?” the resident wanted to know in the video.

As the Makhado Municipality is the responsible authority, the newspaper asked them what they planned to do about the situation. In response, municipal spokesperson Mr Louis Bobodi said at the time that they were going to investigate the complaint and come back to the newspaper “with all relevant information and steps to be taken if there's any by-law contravened”. “We are once more requesting members of the public to alert the municipality if they notice that there are some people who are using their residential areas for purposes not intended, and the municipality will take strong actions against those found to be in the wrong,” stated Bobodi. The municipality never did come back to the newspaper on this matter.

Back to the issue of the crusher in Burger Street. The newspaper obtained a copy of the Makhado Municipality’s Land-use Scheme of 2009, the document that regulates the use of land. This document contains a Clause 21 dealing with businesses needing a “Special Consent” to operate. These businesses are classified as “noxious industries” and are listed in Schedule 1 of the document. Under point 8 of this schedule, the use of buildings or land for “crushing or screening of stone or slag or plants for the preparation of road-surfacing material” is listed as a noxious industry.

The Zoutpansberger asked the Makhado Municipality to confirm whether Bunda’s Logistics had ever applied for or received such a Special Consent. “We have not issued any consent to the company. The process did not happen,” said Bobodi. He added that, in cases where businesses were causing excessive noise or dust pollution, such businesses could be reported to the municipality’s Department of Development and Planning for action.

Mabunda, who indicated that he is also a lawyer, continued to give a lengthy legal explanation regarding his interpretation of the Special Consent clause. “If the wording of this document was saying screening, crushing of a stone full stop, you need special consent [and] I was not going to make this argument … Somebody who drafted this thing [Land-use Scheme document], somebody who made these rules want to achieve something. That is why there is a continuation in this sentence that says ‘for preparation of road surfacing material’. I am not doing road surface material. Here is the sting, the type of stone that I crush cannot be used in the road,” said Mabunda.

Mabunda was very defensive towards the newspaper for asking him questions about his business and stated that he felt he was being targeted. Regarding this, he pointed out that the level of non-compliance [regarding zoning and land-use issues] within the Makhado municipal area was astronomical, and asked the newspaper to first investigate all cases of non-compliance before writing about him. “So be we in a position that says this law applies to this guy but it doesn’t apply to the other guys?” Mabunda said.

What must be pointed out is that, following the interview with Mabunda, he sent through several WhatsApp messages to this journalist, threatening legal action if any “false information” were published. Asked if this was a threat, Mabunda responded by saying: (sic) “But if you publish stuff u do even understand that are false in nature we will approach the court for relief this cannot b seen as threats”.

Mabunda also asked this journalist to give the complainants in this case a message. “Go and tell your complainant it is a 50/50 case depending on how the court will look at this thing, because I see this thing heading to court,” said Mabunda. He was again referring to the interpretation of the rule.

In the interim, Bobodi urged members of the public who want to report non-compliance regarding zoning issues to the municipality's acting Director of Development and Planning, Mr Victor Phalandwa, at telephone 082 529 9969.