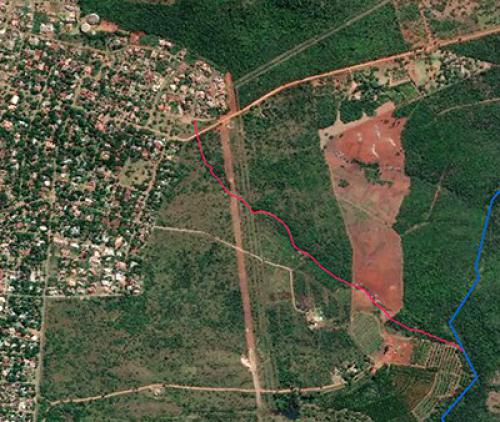 The red line indicates the 1,8km natural tributary feeding into one (blue line) of the many rivers and streams around Louis Trichardt. According to the National Water Act, changing the physical structure of rivers and streams (altering a watercourse, obstructing or diverting the flow of water in a watercourse), by amongst others dumping building rubble in it, is illegal. This, according to one local environmental activist, is exactly what the contractors are doing. Photo supplied.

As municipal infrastructure crumples around us every day, few things are left to celebrate about. But at least the residents of Alwyn and Kameel Street in Louis Trichardt have something to be thankful for with the Makhado Municipality’s decision to completely re-build their pothole-infested streets. Or did they?

The project for the complete rebuilding (rehabilitation) of the streets was advertised by the Makhado Municipality as Tender 49/2021 and was awarded to Tshedza Consulting Engineers CC, with Luzuko Trading Enterprise CC appointed as contractor. Workers wasted no time in stripping away the original surfaces of these streets, but construction activities seem to have quieted down the last week or so. This begs the question: What is happening with the project?

The one above is not the only question being asked about the project. Many want to know why this sudden project to completely rebuild probably two of Louis Trichardt’s least-travelled streets, especially at the beginning of the region’s rainy season, which is probably the worst time to undertake an endeavour of this kind. What is also strange is that nowhere in the Makhado Municipality’s budget (or IDP) is this project listed. In contrast, smaller road-rehabilitation projects in town are specifically listed, projects the newspaper reported on earlier this year.

Local environmentalists also question the way in which the project is being implemented and the impact it will have on the local environment. This includes problems regarding the placement of the project’s industrial site office in a park earmarked for recreational purposes in Tshirululuni Street where it exits onto the Roodewal road; whether a water-use license was obtained for using the municipal borehole located in the same park for construction purposes; and, most importantly, the dumping of building rubble in protected watercourse areas and natural tributaries.

In response to some of these questions, Makhado Municipal spokesperson Mr Louis Bobodi explained that the reason why this project does not appear as a listed item in their budget is because it is funded through the municipality’s operational budget under “maintenance” as a “continuous” process. As for why they had decided to rebuild the two roads completely, rather than just resurfacing them, Bobodi said that this was the most cost-effective way. “The base material samples taken from these streets showed varying qualities of G6 and G8 classifications, resulting in deep potholes and rut damage to the road. Thus, resurfacing would have been a costly exercise and a temporary measure,” said Bobodi.

Regarding the questions about possible environmental violations, Bobodi was to the point. “There should be no negative environmental concerns as it is a temporary structure [referring to the site office] which would be rehabilitated as and when the project tapers towards its finality. The contractor did submit the application for water connection on the existing borehole at the park [to whom this application was submitted and whether it was approved is not known],” said Bobodi. As for the most serious concerns regarding the dumping of building rubble in protected watercourse areas and natural tributaries, Bobodi merely stated: “There is an arrangement in place for the contractor to deposit rubbles at the designated site.”

One local environmentalist the newspaper spoke to, who opted to remain anonymous for the purpose of this article, stated that anyone wishing to obstruct a watercourse must get permission to do so from the Department of Water and Sanitation. Failing to do so constitutes an offence. In this instance, the activist said, whether such permission was granted by the Minister of Water and Sanitation was questionable.

Regarding the above, a tributary is defined as a stream or river feeding into a larger river or water network, while the National Water Act, Act 36 of 1998 (NWA) defines a watercourse as a natural channel in which water flows regularly or intermittently. In this case, the activist said, the contractors are dumping building rubble, apparently only with the permission of the local municipality, in both a watercourse and in a 1,8km tributary just east of the site office. The NWA also regulates water use, in this instance relating to the borehole in the park. “If that borehole is earmarked for domestic use, the contractors mush have a water-use license to use it for construction,” said the activist.

As for the physical rebuilding of the street, the activist said the contractor seemed to know what he was doing. Although not a road building specialist, the activist did question the necessity for digging so deep to remove the existing road surface. “In the process, they even removed the concrete road shoulders and destabilised the existing storm-water-drainage systems in these streets. And why on earth would you start such a project at the beginning of the rainy season? If we get a thunderstorm or flash flood now, these streets will be impassable. And where do you think all the mud and debris will go? Down the stormwater drainage system, of course! This will surely block the system,” said the activist.

Regarding the last remark, some of the residents in these two streets expressed the hope that the project would be completed soon, before the coming rains turned the streets into muddy torrents. At the time of going to press, Bobodi continued to remain mum when asked about the contract value of Tender 49/2021.