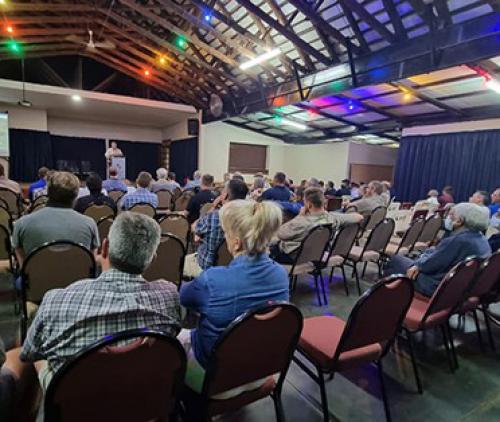 The aim of the meeting, which was exceptionally well supported by a large and diverse number of  people from the local business community, was to drum up much-needed support for the Louis Trichardt Rural Safety Camera Project to help curb crime in the area. Photo supplied.

Civil society can no longer sit back and rely on the police alone for their protection. They will have to get involved in crime-fighting initiatives to assist their local law-enforcement agencies. This was the clear message from Mr Christo Snyman, coordinator of Soutpansberg Rural Safety (SRS), during a public meeting in Louis Trichardt last week to drum up support for the Louis Trichardt Rural Safety Camera Project, a project that will need at least R4 million to get off the ground.

The aim of the meeting, which was exceptionally well supported by a large and diverse number of people from the local business community, was to get the business fraternity to invest in the initiative by highlighting the successes already achieved by the project elsewhere in the region. “The Louis Trichardt Farm Watches started with a small number of LPR (Licence Plate Recognition) cameras in June this year. Because of the overwhelming success, they realized the need to extend the project to try and catch up with other areas, where more than 50 cameras have been put up by farmers out of their own pockets,” said Snyman, adding that this was to cover the vast areas where having the manpower to patrol those specific areas at all times was impossible.

“We need to get cameras in town, the CBD area as well as surrounding areas on the main and secondary roads. Obviously, we know where the hotspots are where we urgently need camera points. But contributions from our community will dictate to our management team where we will be able to place such cameras,” said Snyman. The aim of these cameras would be to warn authorities and law enforcers of potential threats that are en route to Louis Trichardt and surrounding areas, from all directions.

For those who do not know who or what SRS entails, Snyman said that the community needed to know where they fitted into this structure that was approved by the government. The Rural Safety structure was rolled out by Minister Bheki Cele during the relaunching of the Rural Safety plan in October 2019 in Louis Trichardt. “This was not just coincidence. This was because official structures already took note of what was happening in our town, and in the rural areas around us,” said Snyman. He was referring to the by-now well-known and well-organised Soutpansberg town- and farm-watch structures. Snyman referred to the Rural Safety Strategy Document under Chapter 12 of the National Development Plan for 2030, which specifically states that all vulnerable groups, including women and children and rural communities, should enjoy equal protection and their fear of crime should be eradicated through an effective, coordinated response from the police, business community and civil society.

“We have a very strong task team and reaction team consisting of dedicated SAPS members, farm-watch and town-watch members and we can react to any threat or incident from Musina up to Polokwane and Thohoyandou to Alldays, for that matter. Certain areas still have a lot of work that needs to be done, but this is where you come into the picture,” said Snyman.

Among those areas still needing work, Snyman was referring to Louis Trichardt and surrounds, hence the R4 million needed to get the project going. This is where the local business fraternity can make a difference. The project would entail putting up 69 LPR cameras and 66 overview PTZ (Pan Tilt & Zoom) and analogue cameras at strategic points in town and surrounds. “One pole with three LPR cameras can cost us about R100 000,” said Snyman. He added, however, that the price per pole might vary as the prices of the cameras varied.

The proposed Louis Trichardt Rural Safety Camera Project will, when the necessary funding is secured, form part of a national network of cameras. The LPR cameras will be monitored through either the SNIPR or SYNTEL system, while the current town-watch office is envisaged to be used as a control room to monitor the overview cameras.

One of the issues raised during the meeting was that of privacy and who would be monitoring these cameras. The point was clearly made that the system will not be an open one. “You should keep in mind that there is the Protection of Personal Information (POPI) Act that we should take into consideration. SNIPR, the current system that we are having, and SYNTEL, which we are looking at, is very strict with information. Each and every one of us who has access to the cameras had to sign a privacy document,” said Snyman.

Part of the meeting was spent highlighting the successes that the camera project has already had in the region in terms of official police operations. A couple of farmers also used the platform to indicate how the farm-watch cameras, and their own cameras, have drastically reduced crime, such as the theft of avos, nuts and litchis, on their farms. “The cameras work!” said farmer Philip Potgieter.

The proposed project was very well received overall. “Don’t measure it in ‘what is in it for me’ when you decide to donate money. You have to look at the bigger picture,” said Snyman.

Following the meeting, businesspeople had the opportunity to pledge their support and they can still do so. Apart from once-off donations, a debit order facility is also available. For more information on this and how to support the project, phone Brian du Plooy at Tel 082 821 0075.

Snyman concluded his presentation by stating that the time to make a difference was now and the time to pledge for the sake of all of us to fight against crime was now.