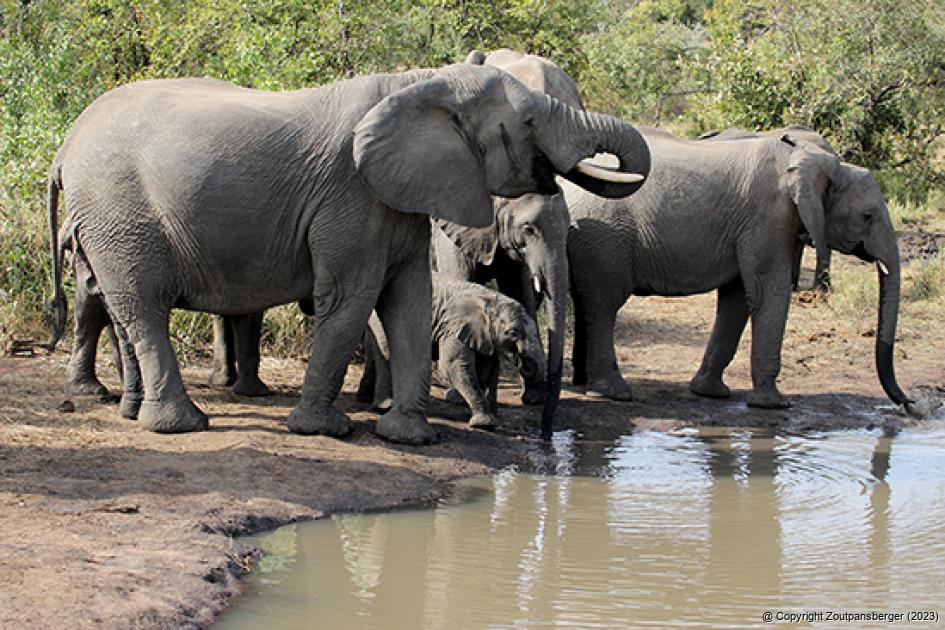 In the Kruger National Park, not far from the Niani area, elephants herds are abundant. The villagers are afraid that herds break out of the KNP or cross the border from Zimbabwe in search of food. Photo taken in the KNP: Adri van Zyl

Residents of Tshenzhelani and surrounding villages say they live in fear of wild animals roaming the area. The sight of elephants, which pose a danger to community members, is a regular feature in the Niani area.

News about some community members who had come across a herd of elephants in the area made the rounds on 27 July. According to these witnesses, the elephants did not attack anyone, but now, when night falls in these villages, the people start to worry about those elephants, afraid that they might come wandering into the village from across the Zimbabwean border.

Villagers in the Niani area have been complaining about the lack of a border fence between South Africa and Zimbabwe for some time now. Undocumented foreigners cross over between the two countries daily. Part of the fence was swept away by the floods in 2000, while other parts had been vandalised and stolen. The new controversial fence project was reportedly damaged within a week, with big holes in the fence through which illegal foreigners climb to get across. The fence is also reported to be of a poor standard and not meant for border fencing.

Vhamusanda Vho-Fhatuwani Munzhelele of Tshenzhelani village said he had called the wildlife authorities when he heard about the destructive elephants, to have them chase the animals back into the wild. According to Munzhelele, the elephants come from neighbouring Zimbabwe. “We were hoping the new fence will also help to prevent the destruction of crops and properties by elephants that cross from Zimbabwe to the villages.” He said that rangers had had to kill two elephants that were terrorising their neighbouring villages last year.

“Our lives are in danger. We don’t feel safe at all,” said resident Sunday Mpofu. “The challenge is that we don’t know whether those animals belong to the Kruger National Park or come from Zimbabwe. That’s why we need to involve the provincial Department of Environmental Affairs.” Mpofu is calling on the department to send reinforcements.

“I’m very worried,” he said. “When they come here, we panic a lot because that thing (elephant) is very dangerous. You may run away from that thing, but they say there’s another one. They have to do something or maybe they can make a joint venture by fixing the whole fence where these animals get through.”

Mr Zaid Kalla from the Department of Economic Development, Environmental Affairs and Tourism said a team of rangers had been assigned to trace the elephants. “The law allows us to take them down if they prove to be dangerous to the communities,” said Kalla. The department appealed to residents to report to or alert local rangers if they spot the roaming elephants.