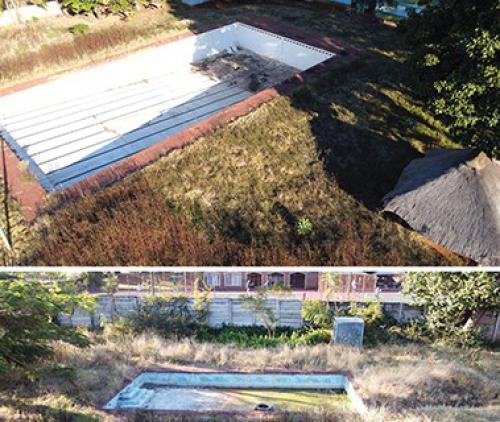 Nothing is left of the once-lush green lawns surrounding the two municipal swimming pools. The pools themselves lie dried up and cracked and the kiosk, garden sheds, and bathrooms are in a delapidated state.

More and more people are starting to seriously question the municipality’s real motives behind their decision to terminate the 99-year lease agreements with sports clubs making use of municipal infrastructure.

The past couple of weeks, more than one sports club indicated that municipal officials had refused to accept rental payments from them, telling them that their contracts had been terminated. The decision to terminate the contracts was taken during the 159th virtual special council meeting on Monday, 31 May. The sport clubs have already indicated that they will be taking the council to court regarding the decision, while the council has already indicated that they will play the “race card” to justify their actions, arguing that the clubs are discriminating against membership based on race and that this discrimination is in conflict with the South African Constitution. This decision was publicly supported by local EFF Cllr Anthony Matumba who, with specific reference to the rugby club, wrote on his Facebook-page immediately after the decision was taken [sic]: “As EFF we fought daily for this contract to be terminated. Today i am happy to announce that our Rugby Stadium is coming back to the hands of the people. No more permission from that White family…”

Ironically, this is the same Anthony Matumba being investigated by the South African Human Rights Commission (SAHRC) as the man alleged to be behind the race-baiting @TracyZille account on Twitter. @TracyZille became quite well known in the weeks leading up to the media storm that erupted in August last year because of “her” controversial opinion on matters, especially those concerning the perceived differences between races. The profile appears to be that of a middle-aged, white woman who enjoys racial stereotyping. During an interview with the Zoutpansberger at that time, Matumba denied that he was behind the @TracyZille account. Apart from the SAHRC investigation, the Makhado Municipality’s Ethics Committee also instituted an investigation into an alleged breach of conduct by Matumba as the owner of the @TracyZille account for “posting racial messages on Twitter”. What is also ironic is that the item dealing with the ethics committee’s investigation into Matumba forms part of the same 159th Special Council meeting agenda in which the council announced the termination of the 99-year lease agreements. Regarding Matumba, the council resolved “that the matter be provisionally withdrawn because the matter is still under investigation”.

In an important election year for the ruling party, the race card will once again enjoy prominence, especially on the local political front, with local municipalities being severely criticised for a lack of service delivery. By the same token, the council’s decision to terminate the 99-year lease agreements has been severely criticised from several quarters as being short-sighted and ill conceived.

The Zoutpansberger tried to get more clarity from the Makhado Municipality the past week in terms of their plans for the facilities after terminating the 99-year lease agreements with clubs making use of municipal facilities. Are they going to evict the clubs, sell off the properties or enter into new contracts with the clubs? If they are going to evict the clubs, will these clubs be compensated for improvements, and have they budgeted for this eventuality? No response regarding these questions was received from the municipality at the time of our going to press.

A good example of a previously well-kept municipal asset that went to ruin the past two decades is the municipal swimming pool in Louis Trichardt.

The Zoutpansberger obtained shocking footage of the current state of the pool. Nothing is left of the once-lush green lawns surrounding the two pools. The pools themselves lie dried up and cracked and the kiosk, garden sheds and bathrooms are in a dilapidated state. This after a tender for the refurbishment and repair of the swimming pool was awarded to Harold Muswobi Construction in 2014. The value of the tender was R500 000 but was later reported to have escalated to close to R700 000. The project turned into somewhat of a fiasco, however, with allegations of shoddy workmanship and delays. The refurbished pool would have been opened by 30 June 2014, but this was postponed because of the problems. The municipality then stated that the pool would definitely reopen in September 2015. This also never happened and, since then, the project (and swimming pool) has been lying dormant. The pool never re-opened for the public.

Questions about why the municipality had halted the swimming pool project and allowing it to go to ruin were answered by Bobodi. Some of the answers, however, were somewhat confusing. “The project [swimming pool] has since been stopped and halted as the site has to be used for the development of a squash facility by Makhado Crossing Mall management,” said Bobodi.

Whether this will ever happen is, however, debatable. Let us explain:

When the Masingita Group of Companies, the developers of the Makhado Crossing Mall, decided to expand the mall into a regional mall, part of the agreement they made with the municipality was that they would relocate the sports clubs located on the municipal land on which they wanted to expand. Eventually, the rugby, “jukskei” and racing pigeon clubs did get new club houses on new premises. The squash club and the hall housing the gymnastics, badminton, and wrestling clubs, however, remain where they are and were never relocated.

Last year in October, rumours started to surface that Masingita no longer had any intention of developing the area still housing the squash, badminton, and wrestling clubs. Bobodi confirmed this, stating that Masingita had offered the land back to the municipality. At that stage, Bobodi said, the municipality had yet to decide whether they were going accept Masingita’s offer. Since then, nothing has happened.

Bobodi’s statement that they plan to relocate the squash club to the municipal swimming pool area came as news to Soutpansberg Squash Club chairperson Ronel Welman. “It is the first time we hear of this. Nothing is ever communicated to us by the municipality. We don’t even know if we are going to be relocated or not,” said Welman.