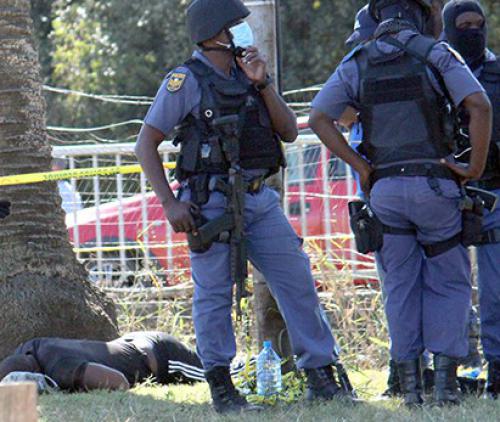 The suspect that was shot dead by police in Louis Trichardt on Sunday morning. Photo: Kaizer Nengovhela.

A man was shot dead and three others arrested in a violent shootout between suspects and police in Louis Trichardt on Sunday morning. The shootout follows just two days after a father and son was shot dead at Bandelierkop by a taxi driver in an alleged road rage incident.

In the absence of a police report on the incident, details about Sunday’s shootout at the corner of Rissik and Klein Street near Bridge Auto remain unclear. The shootout is said to have taken place around 11:00 when police apparently confronted a highly sought-after suspect. The situation, however, quickly escalated and a shoutout ensued during which the suspect was killed. The three men who were accompanying the suspect were arrested at the scene.

In the other incident, a 33-year-old taxi driver was arrested and charged with two counts of murder after he shot dead a father and son at around 08:30 at the Viva fillings station at Bandelierkop on the N1 between Louis Trichardt and Polokwane. The father and son were identified as the 52-year-old André Duvenhage and the 29-year-old Danie Duvenhage.

The fatal shooting followed an alleged road rage incident which started along the N1. The taxi driver allegedly turned into a filling station at Banderlierkop and was reportedly followed by the two males. While at the filling station, the taxi driver produced a gun and shot both the father and his son. The son died instantly and the father died on arrival at the hospital in Louis Trichardt.

“The taxi driver used a licensed firearm and it has been confiscated for ballistic examination. He has been arrested and is under police guard in hospital after allegedly accidentally shooting himself during the alleged fight,’ said provincial police spokesperson Brig Motlafela Mojapelo in a press release a day after the incident.

In the meantime, provincial police commissioner in Limpopo, Lieutenant General Thembi Hadebe has condemned this incident and has ordered a full investigation into the firearm that was used, its owner  and the circumstances that led to the shooting.