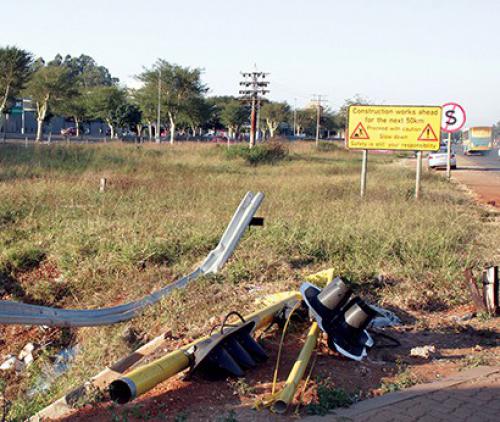 A week after the Makhado Municipality said that they would attend to the broken traffic lights at the busy R524/N1 crossing, nothing has happened.

More than a week after Makhado municipal spokesperson Mr Louis Bobodi had indicated that the municipality would attend to the damaged four-way traffic lights on the busy N1/R524 intersection in Louis Trichardt for safety purposes, motorists have yet to see the light – literally!

When the Zoutpansberger tried to find out who the responsible authority was for fixing the damaged traffic lights, the newspaper was literally sent from pillar to post in a systematic process of “passing the buck”.

One would have thought that the South African National Road Agency (SANRAL) would be the responsible authority. Not so! SANRAL responded by saying that the local municipality was responsible for the maintenance of traffic lights along the N1. This the Makhado Municipality denied, indicating that the responsibility rested with the Road Agency Limpopo (RAL). RAL, however, again passed the buck back to SANRAL. In the meantime, this intersection became ever more dangerous, especially during peak traffic periods as motorists grew ever more frustrated because of traffic jams. This eventually prompted the municipality to act. “As things stand now, the robots [traffic lights] are not in our assets, but for safety purposes the municipality is going to attend to them,” said Bobodi on 18 May. Sadly, at the time of our going to press this week, the traffic lights were still out of order.

Amidst all the confusion about responsibility for the traffic lights, the question was also asked whether the Masingita Group of Companies might be accountable. “The installation of the traffic lights was installed by the developer at the developer’s cost (and all the road upgrades as well) according to SANRAL approval and specification,” said Ms Landi van Deventer, head of marketing for Masingita in response to the newspaper’s media enquiry.

Van Deventer added that the works were inspected by SANRAL as the authority and ultimate custodian of the works as [an] improved asset. “…however, the maintenance of the lights vests between SANRAL and the municipality,” said Van Deventer. She explained that, upon completion, the roads and road furnishings were handed over to SANRAL and the municipality. “Please note that there have been various damages to the works as a result of public use that do not fall under the developer’s liability as the work was done to the highest quality and improved public safety dramatically,” concluded Van Deventer.