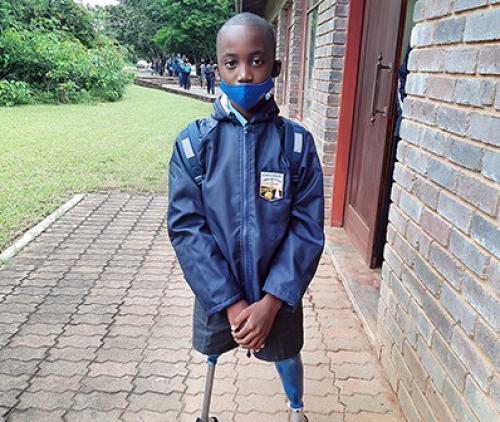 This year the young amputee, Vhutuhawe Nemutandani, has been enrolled in one of the top schools in Limpopo, the Emmanuel Christian School outside Louis Trichardt. Photo supplied.

Two-and-a-half years ago, a young double amputee, who was then a scholar at a special school in Thohoyandou, became the recipient of a prosthetic limb, courtesy of IsAbility, the Jumping Kids project and Harcourts. This year, the young amputee, Vhutuhawe Nemutandani, has been enrolled in one of the top schools in Limpopo, the Emmanuel Christian School outside Louis Trichardt.

This positive step towards inclusive education was driven by the local IsAbility Sports Club. Vhutu is part of the Jumping Kids Education project, which facilitates the placement of physically disabled children in suitable mainstream schools countrywide.

Education is a very real problem facing the parents of a child with any form of physical disability, whether it be visual, auditory, or physical. In the Limpopo Province, a number of primary schools for special-needs learners exist, but only ONE special-needs school caters for secondary (high school) learners. “One needs to ask the question: Where do all the learners with disabilities go after Grade 7, because one secondary school can certainly not accommodate all the learners from the many primary special-needs schools? The fact is that most physically challenged learners are intellectually perfectly able to complete a full academic education in what is termed a “mainstream” school, but they are not afforded the opportunity. Tertiary education should also be as accessible to them as it is to those who are not physically challenged,” said IsAbility spokesperson Ms Sandy James.

Vhutuhawe was born with a condition called ‘tibial hemimelia’, where the tibia in the lower leg is defective. This resulted in the amputation of both his legs at a young age. After his mother passed away early in his life, Vhutu has been cared for by his guardian and family and has been in a special school for a number of years.

“The problem that has stood in the way of inclusive education for many years is that most mainstream schools feel they are inadequately equipped to care for physically disabled learners.   However, there are schools that defy the odds. Emmanuel Christian School is one such pioneering school.  In fact, amongst its Grade 12 graduates, this school has had at least three wheelchair-bound learners successfully pass matric with bachelor passes and proceed to tertiary institutions over the years,” said James. She explained that Vhutuhawe’s guardians and family were extremely grateful for Emmanuel Christian School’s willingness to accommodate Vhutu, who is a bright young boy with excellent grades and the potential to excel, given the high-quality education offered by the school. They are also thankful to Jumping Kids for not only providing and adjusting Vhutu’s prosthetic limbs on an annual basis, but also for funding quality education which will take him to Grade 12 and beyond.

Anyone who wishes to find out more about or become involved in IsAbility’s education and bursary programme for physically disabled learners is welcome to contact James on 084 506 3333 or send an e-mail to is.ability.limpopo@gmail.co.za.