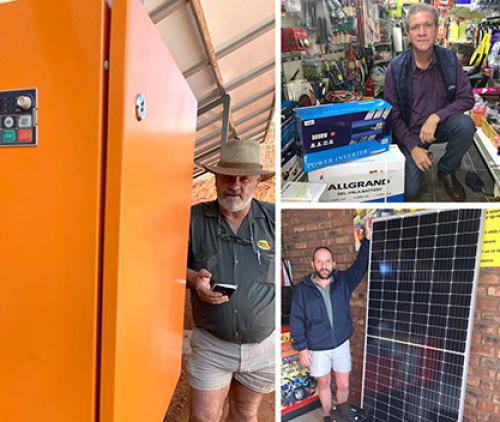 Left: Mr Cois Pretorius of Cois Elekstries, pictured at one of their major solar power installations. Photo supplied. Above right: Setting up a basic solar power systems does not need to cost you an arm and a leg. Mr Bennie Pieterse of DIY Home and Hardware has everything you need to get going for under R26 000. Below right: Choosing which battery to use is important when deciding to install a solar-power system. Regarding this, speak to experts such as Mr Bennie Rheeder of Protech Batteries.

With Eskom announcing a 15.6% increase in electricity tariffs as from 1 April, more and more people are starting to look at affordable electricity alternatives, such as solar power. But is solar power really a cost-effective alternative at this stage? The Zoutpansberger tried to find out.

A well-known fact is that the most expensive part of solar power is the initial installation cost. After that, basically everything is free, but provision should be made for maintenance and battery replacement. This could also turn out to cost you a pretty penny.

The past few years, load shedding and unplanned municipal power outages have forced many people to consider “getting off the grid”. One Louis Trichardt resident the newspaper spoke to said he had decided to make the change in October 2020. Since then, he has spent about R260 000 at his home, which is running on a dual system of solar power and municipal electricity. Municipal electricity is used mainly at night or to run his heavy machinery. “I have calculated that I am saving about R2 000 on my monthly electricity bill. What bank will give you such a monthly return on a R260 000 investment? It will take me about five to seven years to pay off the system, but I am not disappointed that I did it. Depending on future Eskom increases, I might even pay it off earlier,” said the resident. In this case, he has installed a three-phase system at his home, but not everyone needs such a costly system.

According to Mr Bennie Pieterse of DIY Home and Hardware, you could get away with a “beginners” system that would set you back about R26 000. “This will allow you to watch TV, keep the lights on and run a fridge, for instance, during load shedding,” said Pieterse.

Pieterse’s setup consists of four 350W (Watt) solar panels (about R7 200), one 150Ah (Amp Hour) gel battery (R7 000), one 5 000W inverter (R6 000), two 50A regulators (about R2 400) and allows for an additional R2 500 for electrical cables and fixtures. Many might argue that one need not start off with a 5000W inverter. “The problem is, if you start off with a smaller invertor and you want to upgrade your system in a couple of weeks, you will probably have to buy another inverter. Do not forget the importance of your regulators. In this case, you need two, one for every two 350W panels. Regulators are extremely important to your setup, as they regulate the power going to your batteries. If you have no regulator, the solar panels will just keep on charging your batteries until they pop,” said Pieterse (the newer-generation inverters come with a built-in regulator).

Solar-power setups may differ immensely, and although things can get a little technical, the basic components stay the same. “It is really not rocket science,” said Mr Bennie Rheeder of Protech Batteries. He also offers solar power advice and services. Rheeder said that the most important aspect of a solar power setup is probably the batteries. He stocks Dixon 100AH and 200AH batteries at a cost of R3 000 and R6 000 respectively. For him, the choice of batteries is one of horses for courses. “If you just want to keep the lights on during load shedding, then these batteries are fine. If you are looking at a more long-term solution to run your home completely off the grid with three-phase electricity, then you should really consider investing in lithium batteries,” said Rheeder. He explained that four Dixon 12V 200Ah batteries are equivalent to 5kW (Kilowatts) that will set you back around R24 000, with a predicted lifespan of 10 years, if looked after. “The problem is, most people do not look after their batteries,” said Rheeder. Better value for money in the long term, said Rheeder, would be to invest in a 3,5KW lithium battery that costs around R20 000 to R23 000.

Although you can install your own solar system at home, people should be aware of a few legal aspects in this regard. “Any solar installation is the same as an electrical installation. You need a CoC (Certificate of Compliance), which only an accredited person may issue,” said Mr Cois Pretorius of Cois Elektries. As an accredited solar installer, he shared his knowledge.

For instance, Pretorius said, legislation for the installation of solar systems is different for farms and towns. “In town, if you want to install a solar power system, your maximum generating capacity is 5kW. On farms, your generating capacity is 75% of your transformer. So, if you have a 50 kilovolt-ampere (kVA) transformer on your farm, you can generate 37.5KVA,” said Pretorius.

The reason why a limit is placed on the amount of electricity you can generate, is because you are not allowed to push excess electricity back into the grid if you make use of a grid-tie system (running off solar power by day and municipal electricity at night). “All the legal aspects of generating solar power are not yet in place, but this could be completed within the next three to four months,” said Pretorius. People will then be able to feed excess power back into the grid.

According to Pretorius, the cost of generating 1kW of solar power is between R1,13c and R1,18c. This price is calculated by spreading your initial installation cost over the total repayment period of your investment. “After that, it gets much cheaper because solar power is free. Keep in mind that you will, however, have maintenance costs, such as replacing batteries.”

Considering solar power as an alternative has never been easier. “Many banks now finance solar-power installations at your home, so go and speak to your bank. I know for a fact that Standard Bank and FNB do. Note that they will only finance an installation if it is done through an accredited installer,” said Pretorius. Another added incentive to switch over to solar power, said Pretorius, was the tax benefit you receive. “You can write it off as 100% depreciation on the total amount within your first year. Unfortunately, this only applies to farms and businesses,” said Pretorius.

One local business that recently installed a solar power system to supplement their electricity needs, is Soutpansberg Koelkamers in Louis Trichardt. They invested R1,4 million in installing a 144kW solar power system at their business premises. “It accounts for about 75% of our electricity needs,” said Mr Riaan Smit of Soutpansberg Koelkamers. He added that at this stage they do not make use of batteries in the system as it is just too expensive to utilise it meaningfully. For him it is all about cost. “Cost saving was the main reason for financing the installation,” Smit said. He said that according to their data, the installation would bring about a cost saving of about 20%. They also negotiated very reasonably financing terms with the investment expected to repay itself over the next four years.

For more information about solar installations, residents are welcome to speak to any of the persons mentioned in the article. Other people who specialise in this field will also be more than willing to assist.