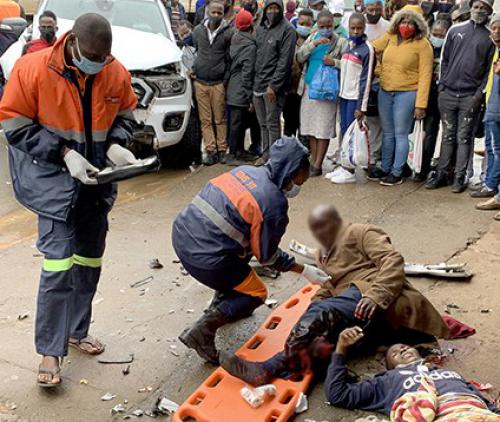 Two people lie critically injured after the bakkie in the background crashed into them on Tuesday afternoon in Louis Trichardt's busy Songozwi Street. Amabulance staff were on the scene quickly, but sadly, the injured man in the photo succumbed to his injuries a short while later.

Residents of Louis Trichardt were left speechless on Tuesday after a motorist allegedly travelling at high speed crashed into pedestrians and hawkers in the town’s busy CBD. The crash occurred around 14:00 just opposite the main entrance to Game in Songozwi Street.

According to Makhado police spokesperson Constable Irene Radzilani, two vehicles (a Ford Ranger and a BMW) collided, causing the driver of the Ford Ranger to lose control of his vehicle and crash into four people, a man, two women and a three-year-old child, on the sidewalk.

The man and one of the women suffered severe leg injuries, to such an extent that, later the same day, the man was confirmed to have passed away at the Louis Trichardt Memorial Hospital from his injuries. The other woman sustained lesser injuries, with the child miraculously escaping the crash without injury.

At the time of our going to press, the deceased’s identity was still unknown. Radzilani also confirmed that the police are investigating a case of culpable homicide, but that no arrest has been made.

"This is really bad. I was chatting to these ladies not an hour before the accident and witnessed everything. I was wondering why the driver of the Ranger was overtaking and driving at such a high speed in town,” said Mercy Kapeta. She was grateful that the child was unhurt.

Kapeta said that the two injured women (and the child) were Zimbabwean nationals staying in Tshikota. They are hawkers who sell masks, hats, wallets, socks, and mealies. Moments after the crash, Kapeta rushed to the scene and took the child out of harm’s way. She then called the father of the child and tried to assist the injured. "The future of this family is shattered. I have known them for years. One of the ladies, mother of the three-year-old child, has been selling her stuff at this spot for four years. This is their only income," said Kapeta