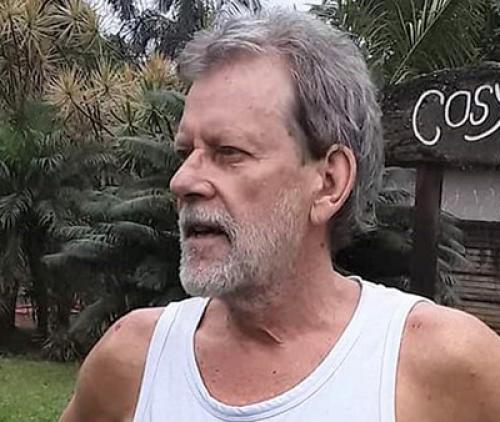 Wally eager to get fighting fit again after stroke

Readers of the Zoutpansberger will recall that local environmental activist and Soutpansberg resident Wally Schultz suffered a massive stroke on 30 October last year.

Friends and acquaintances were quite surprised when noticing that Wally was active again on Facebook. With the help of his sister, Delene Wingrove, he started using social media again. “I just try and teach him the small things like how to use his WhatsApp to send voice notes as he cannot read or write yet. He is so excited that he has mastered that now. It keeps him in contact with his friends,” Delene says.

Wally’s strong fighting spirit has kept him going all along. When the following message appeared on Facebook on 20 January, all Wally’s friends were delighted to hear of the improvement with his health. Delene wrote on Wally’s behalf: “Remembering that scary day that I had my stroke, I was petrified of dying, but am so grateful that I am making a really great recovery with the help of awesome therapists at our Provincial Hospital. I am truly getting stronger by the day and want to thank you all for your kind messages and prayers that my sister reads to me.”

According to Tiffany, one of Wally’s three daughters, he is very determined to get better. She says that nothing is worse for him than just sitting around. He made a very quick recovery. According to her, he is physically doing very well. They got him a bicycle as he is very keen to be active and fit and to become involved again in the community. “He has been very frustrated for being out of the loop since his stroke and is eager to continue his work,” she says.

Wally’s main difficulty is with the condition of aphasia that affected his language ability. The implication for him is that he understands everything well enough, but he struggles to find the right noun. “He is working very hard on it, and it seems to be improving every week,” says Tiffany.

The family is very thankful for the amazing occupational and the speech therapist at the provincial hospital who are working with him. “The Covid situation at the moment is, however, frustrating, as he hasn’t been able to see them for some time,” mentions Tiffany.

She also adds that the fundraising for Wally’s expenses went very well. Their goal is R500 000 and they have raised around R200 000 so far. They would like to thank everybody who contributed, from the bottom of their hearts. The funds have been used for, amongst others, expenses towards the private hospital fees, the neurologist’s fees, tests, scans, medication, and a caregiver. “Unfortunately, he hasn’t been able to undergo surgery, as the risk of a second stroke was too high. There is a possibility that it can still be done – something that we are following up,” Tiffany mentions. She adds that he also needs to undergo surgery on his eye, as one eye is almost blind. At the same time, the family is also trying to put him on a medical aid.  Contributions can still be made via the Click ‘n Donate website: https://clickndonate.com/wally-schultz-stroke-recovery-goal-r-500-000/

While Tiffany (from the Western Cape) and her one other sister, Kylie (from Dubai), visited him for about three weeks after the stroke, they managed to get Wally a new place to stay which is near other people and close to the hospital.

“My dad has amazing support there in the community. We are just so grateful for his sister Delene who spends so much time with him, teaching him things and keeping him company whenever she can. He also enjoys the visits from his friends – it really keeps his spirits up. The more he listens and talks to people, the better he gets,” Tiffany concluded.

Wally mentioned on a WhatsApp voice note: “I am always strong. I never give up. I help everybody. I love everybody.” In the Facebook message he pleads: “Please don't stop sending me messages ... it really keeps me motivated. Watch this space ... soon I will be back stronger than ever before...”