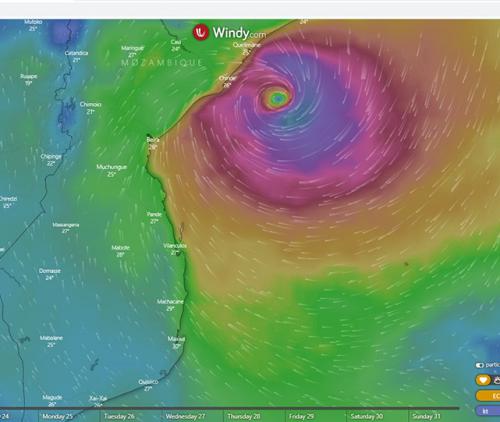 An image of tropical storm Eloise just off the coast of Mozambique. The screenshot was taken from the website www.windy.com which shows the path of Eloise in relative real time.

As tropical storm Eloise bears down on the Mozambique coast, residents in the northern parts of Limpopo are warned of heavy rains and possible flooding in the coming week.

After making landfall, the SAWS stated, Eloise is expected to track further south-westwards towards the border of South Africa and Mozambique. “While overland, weakening is expected to take place, however, extreme rainfall is still expected over southern Mozambique, the eastern lowveld and escarpment of Limpopo and Mpumalanga Provinces as well as northern KwaZulu-Natal in South Africa,” said the SAWS. The heavy rains are expected to start from Sunday continuing into next week. “Possible impacts as a result of all this rain include widespread flooding, damage to roads and bridges as well as possible displacement of affected communities,” said the SAWS.

Commenting on the issue of possible flooding the chairman of the Soutpansberg District Agricultural Union, Mr Fanie Havinga, said there is not much you can do to prepare yourself except doing the obvious like staying clear of low-lying areas and avoiding flooded streams and rivers. “It is nature and nature is unpredictable. But as farmers, we are in a situation where we have technology to our advantage. We use this technology to monitor the situation, so we know what is coming. In that regard, we are prepared,” said Havinga.

That flooding will take place in parts of Limpopo is probably a given fact. “The Soutpansberg is already very wet. I think that if we get a lot more rain now, there will be flooding. The forecast for rain is between 200mm and 300mm over a period of two days. This will result in a lot of rundown water. Regarding this, my advice to farmers in low-lying areas is to monitor water levels. If you need to remove water pumps, do it in time,” said Havinga.

Havinga added that as tropical storm Eloise nears Mozambique, it already started moving down southwards in the Mozambique Channel and is expected to lose momentum as it moves overland. “She [Eloise] is not as intense as we thought it would be and any rain it brings will be welcome. I really hope that she moves far enough down over the inland and bring much-needed rain to areas where it is still very dry such as in the Mokopane area. I know for a fact that they need a lot more rain,” said Havinga. He concluded by saying that in the end, we are in God’s hands. “He will give us what we need and will also give us the strength to handle anything that comes with it.”

From a disaster management point of view the spokesperson for the Vhembe District Municipality, Mr Moses Shibambu, urged residents of the Vhembe district to stay on high alert. “Make sure you are safe at home,” said Shibambu. He added that as a municipality, they are always ready to assist the public with possible disaster relief in conjunction with departments like Social Development and even private businesses.

In the meantime, the management of the Kruger National Park (KNP) have also announced that with heavy rains and strong winds expected over the weekend, they have placed their disaster teams in the park and external role player on high alert. “Our scientists, in conjunction with the South African Weather Services are closely monitoring developments and will advise on whether we need to evacuate camps in the affected areas or not. As a precautionary measure, we have already closed all gravel roads and some facilities in the Pafuri area after heavy rains which fell in the evening of 20 January 2021,” said KNP managing executive Gareth Coleman.

South African National Parks (SANParks) also advised those persons with bookings at flagged camps in the far north such as Sirheni, Shimuwini and Bateleur Bushveld Camps, as well as Sable Hide that they will be accommodated at Letaba, Mopani, Shingwedzi and Punda Maria Rest Camps.

“Emergency teams are on standby in the park monitoring the situation and will be activated if there is any danger. We urge tourists to be extra cautious during this period and to call our emergency number for any assistance only on 076 801 9679 or 013 735 0197/4064,” concluded Coleman.