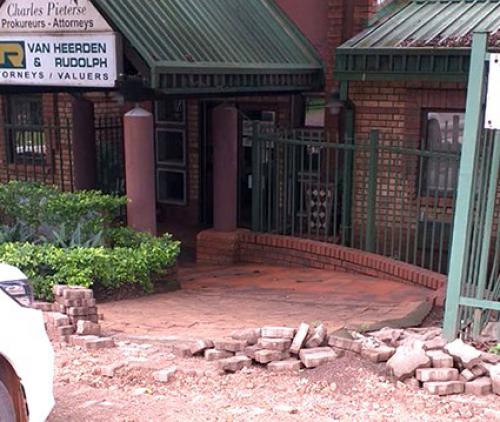 Staff at this company in Devenish Street were told that the contractors would be finished digging and the paving restored within two hours. The paving was eventually only placed back two days later. Photo supplied.

Fibre optic trench digging a nightmare for many

Since the announcement a couple of weeks ago by the Vuma company that they will start digging trenches for the installation of high-speed fibre optic Internet cables in Louis Trichardt, a feeding frenzy has seemingly erupted between competing fibre optic companies to “get there first” with residents suffering the consequences.

Last week the Zoutpansberger asked residents who suffered these damages at the hands of the contractors to give the newspaper a call. “They promised that they will leave it as they found it. Rubbish!” was the general consensus.

The biggest problem remains: To whom do you report it if a waterpipe or power cable is hit, cutting of supply to your home?

In reaction to a media enquiry about the unacceptable state of affairs, Makhado Municipal spokesperson Mr Louis Bobodi said that they are aware of instances where there are erratic cable damages by the fibre installation contractors. Regarding this he, however, stated that the municipality has an arrangement with the contractors. “We have approved their operations with corrective conditions on damages to our infrastructure,” said Bobodi.

Asked about the frequency of damage to cables, Bobodi said that even though it may only be a few incidents per week, one bulk supply cable that gets damages will unfortunately affect several customers.

As for contractor’s failure to leave things as they found it, Bobodi said that they expect contractors to respect the improvements made on walk and driveways on servitudes. “Contractors are responsible for the restoration of such facilities should their operations happen to disturb such. Peaceful engagements with home-owners of facilities should precede contractors’ trenching activities,” said Bobodi.

One of the major complaints by residents is that the contract workers are not easily recognisable. Residents therefor do not know who the contractor is if they want to pursue “peaceful engagements” as pointed out by Bobodi. This begged the question: How many contractors are at present digging trenches?

“Permission was given to six companies,” said Bobodi. He did not, however, know who they were. “We have also received complaints that related to cables damaged by these contractors for fibre cable installations. We are further meeting with these contractors this week,” Bobodi concluded.