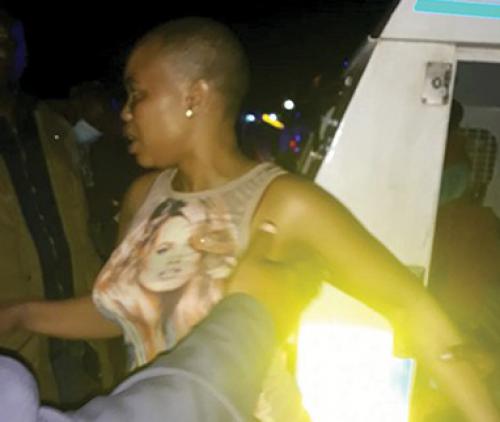 Mamorobela is escorted to the police station shortly after the accident on 20 September. Photo supplied.

The Makhado Municipality’s “partying” councillor, Cllr Tebogo Mamorobela, was in the news again the past week after it had come to light that key evidence in her drunk-driving case had gone missing.

Provincial police spokesperson Brigadier Motlafela Mojapelo confirmed on Tuesday that a criminal case of theft and defeating the ends of justice has been opened after Mamorobela’s blood kit (to test her blood/alcohol level) had gone missing from the Makhado Police Station where it was stored.  “The docket has been taken over by the provincial detectives,” said Mojapelo.

Mamorobela’s blood kit was taken after a vehicle accident on Sunday, 20 September. She was allegedly driving a motor vehicle under the influence of alcohol at about 04:30 when she was involved in a collision with another motor vehicle at the corner of Jeppe and Anderson Street in Louis Trichardt. “The scene was duly visited by the local police and both drivers were charged and taken to hospital for taking blood samples. Both were scheduled to appear in court on Monday, 21 September, but the case was not enrolled as the prosecutor gave further instructions that had to be followed up by the investigating officer, which included the results of the blood tests,” said Mojapelo.

The circumstances surrounding the accident and Mamorobela’s arrest raised questions, especially regarding the Makhado police’s handling of the case. From the start, allegations were rife that some members of the local police had deliberately tried to botch the investigation to protect Mamorobela. Apart from the case’s not being put on the court roll because of the outstanding results of the blood test, the police docket contained several other serious shortcomings. Among the critical pieces of information allegedly omitted from the police docket were an accident sketch plan, witness statements, and a police account of the state of the driver’s sobriety. Ms Mashudu Malabi, liaison officer for the office of the Director of Public Prosecutions in Polokwane, later confirmed that this was the reason why Mamorobela’s case was not put on the court roll. She said that the elements of the offense [that had prompted the police to arrest Mamorobela for drunk driving] had not been contained in the police docket. These are needed to link Mamorobela to the offense she has been charged with. The docket was therefore referred back to the police to complete correctly.

Mamorobela’s blood kit’s going missing from the Makhado Police Station now further fuels belief that certain members of the local police are trying to cover for this high-profile member of the ANC. But the provincial office of the SAPS is not impressed. “As the police management in the province, we view this incident in a serious light and already internal investigations, in addition to the criminal investigations, are underway to determine exactly what happened. Any member who might have conducted himself or herself inappropriately will be dealt with in accordance with our internal processes,” said Mojapelo. At the time of our going to press, no arrest had been made in connection with the missing blood kit.

Mamorobela first made national news headlines in April this year, when she and two of her friends were arrested after a video of her partying with friends on her birthday started circulating on social media. This was amidst the Level 5 lockdown period, which prohibited all alcohol sales and gatherings such as birthday parties.

Following the damning video, Mamorobela and her two friends were arrested on charges of contravening the lockdown regulations. After their court appearance, they were released on R1 000 bail each. A resolution by the ANC of the Vhembe region was subsequently taken that Mamorobela should recuse herself from all activities of the municipality with immediate effect, until the matter was finalised by the court. She was also scheduled to appear in front of the Makhado Municipality’s ethics committee.

Apart from being an Makhado Exco member as Head of Corporate Services, Mamorobela has also performed duties as acting mayor of the Makhado Municipality in the past. Her political career started at the South African Youth Council and the South African Students Congress. She served in the ANC Youth League’s provincial executive committee for Limpopo from 2012 to 2014. She has served as the deputy chairperson of the ANC Makhado sub-region since 2018 and is the convener of the ANC Women’s League’s Young Woman Desk of Limpopo.

Mamorobela successfully cleared her first legal hurdle when the charge of contravening the lockdown regulations against her was provisionally withdrawn in the Louis Trichardt Magistrate’s Court. The prosecuting authority explained that this was done to “allow the investigating officers to finish their investigation”.

In the meantime, Makhado Municipality’s spokesperson, Mr Louis Bobodi, stated on Tuesday that Mamorobela had since appeared before the municipality's "ethics" committee. “Yes, she has already appeared, and the decision has already been taken by Council, which has been referred to the MEC for COGHSTA for implementation,” said Bobodi. Asked what the decision was, Bobodi responded by saying: “Protocol dictates that we wait for the approval or disapproval of the MEC.”

The newspaper was, however, able to determine that the report (and decision) on Mamorobela’s conduct had in fact served before the council during the 155th special council meeting on 29 September and a copy of the agenda was obtained. Mamorobela will apparently also dodge the proverbial bullet in this regard. The worst that is going to happen to her is that she will be reprimanded and asked to apologise to the municipality for her conduct. The agenda also indicates that she has asked to resume her duties at the municipality. At the time of our going to press, Bobodi had yet to confirm whether Mamorobela was still suspended from her council duties.