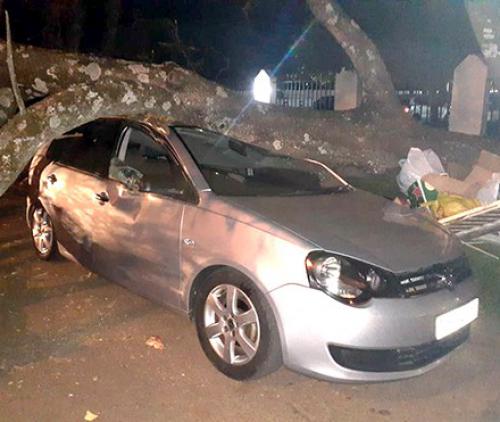 The mangled remains of Allen Kennedy’s vehicle after a massive tree had crashed down on it on Monday evening. Allen and a friend of his were lucky to escape from the care unhurt. Photo supplied.

Judging by the number of unusual events occurring in Louis Trichardt over the past few weeks, one might mistake the events as coming out of an episode of the popular Netflix series Stranger Things.

In July this year, the Zoutpansberger reported on how Ms Linda Oosthuizen’s car was written off after a tree had fallen on it while parked in front of Our Home Old Age Home. At the time, Linda was standing just a couple of metres away of her vehicle when the tree crashed down on it and was lucky to escape unscathed. Then, in August, the newspaper reported on a stray bullet that struck the generator room at the Zoutpansberg Private Hospital. Once again, nobody was injured. Now, for the second time in a few months, another vehicle was crushed by a tree.

The latest freak accident occurred amidst the violent windstorm on Monday evening around 19:00. The 42-year-old Mr Allen Kennedy of Louis Trichardt was driving in a southerly direction in Munnik Street and stopped in the street between Jeppe and Vorster Street to drop off a friend.

“Even before my friend could exit, we just heard this loud noise!” said Allen.

The noise they heard was made by a massive tree that had fallen over, crashing onto Allen’s vehicle sideways, crushing the vehicle from the passenger side’s windshield pillar to the rear pillar on the driver’s side. The tree was so big, it completely covered the entire road, with its branches touching the high-voltage power lines across the street

“We did not know what it was that hit us. I had looked in my rear-view mirror before we stopped and there was no car coming. I am always careful. Whenever I stop, I always check my rear-view mirror. After the shock, I realised there were branches all over us,” said Allen.

Because of the damage, Allen had to kick open his door. After getting out, he also pulled his friend from the vehicle through the driver’s side. Once out of the vehicle, they realised how lucky they were. Allen is convinced that if his friend had climbed out just a few seconds earlier, the friend would definitely have been killed by the falling tree.

The freak accident scared Allen, who described the incident as extremely frightening. “I was not even worried about the car. I was just worried about us being all right … I have been in accidents before. It was frightening because I did not see it coming. Normally, you can see an accident coming … that tree could have snapped our necks!” said Allen.

Allen is grateful that they are alive and miraculously walked away without injury. His guardian angel was probably working overtime. “You know what, at work I have been involved in three vehicle accidents. Privately, I have been involved in two accidents. But in all the accidents, I was not driving. I was a passenger. This is the first time I was driving. So, this is now my sixth accident … But this is the first time that something like this has happened – something unexpected,” said Allen.

Fortunately, Allen has insurance on his vehicle. “You know, I nearly cancelled my insurance about two months ago, because I have been driving the vehicle for 10 years and have never had an accident. I never expected something like this to happen. You always think that, if you are a good driver, you will not get into an accident. Then something freaky like this happens! Luckily, I did not cancel my insurance,” said Allen. Despite having insurance, Allen is sad about his vehicle. “It is a 2011 model, but it is well looked after. I look after my vehicles … unless a tree falls on it,” said Allen.