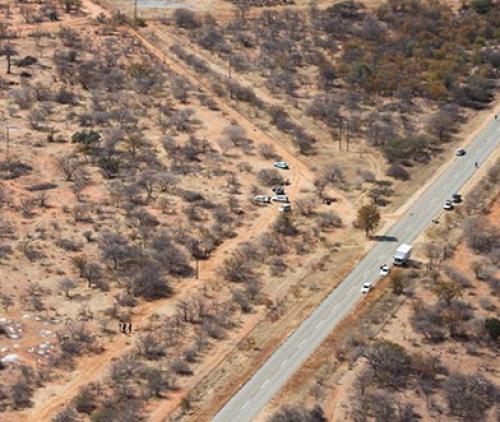 At the beginning of August, community members started invading one of the farms earmarked for the SEZ development, the farm Dreyer (MS 526). They started staking claims on erven on the farm, apparently believing that the erven will have to be individually bought back from them to allow for the SEZ to be developed. The situation got so out of hand that the Mulambwane CPA had to ask the High Court in Polokwane to intervene and grant them an urgent interdict to prevent further invasions. Photos supplied.

Yea or nay for SEZ

Government’s plan for the establishment of a Special Economic Zone (SEZ) with a metallurgical cluster between Musina and Makhado gained some more momentum this week with the first round of public meetings being held as part of the environmental impact assessment (EIA) and public participation process. This process will ultimately determine if the SEZ is given a “yea or nay”.

The proposed Musina-Makhado SEZ (MMSEZ) is located on an 8 000-ha piece of restituted land near Mopane. The area stretches from the railway line in the west to the N1 in the east, between the Huntleigh turn-off in the south and the Mopane turn-off in the north. Spearheading the project is the Limpopo Economic Development Agency (LEDA), who has appointed Delta Built Environment Consultants (Delta BEC).

Since the announcement of the proposed MMSEZ, the South African government has struck a lucrative R40 billion deal with the Chinese regarding the development of the SEZ. South African Energy Metallurgical Base (Pty) Ltd was subsequently appointed as the MMSEZ operator, with controversial businessman Mr Yat Hoi Ning as its chairman.

According to an interview Hoi had with a reporter of China Reform Daily, he said the development of the MMSEZ would comprise the building of a 20 Mtpa (million tons per annum) coal-washing plant, a 3 300 Mw coal-fired power plant, a 3 Mtpa coke plant and a 390 Mw waste-heat power plant. The other factories planned are a 3 Mtpa high-carbon ferrochrome plant, a 1 Mtpa ferromanganese plant, a 500 000 tons per annum (Tpa) silicon manganese plant, a 3 Mtpa stainless steel plant, a 1 Mtpa high-vanadium steel plant, a 1 Mtpa high-manganese steel plant, a 5 Mtpa metallurgical lime plant, a 1,2 Mtpa titanium dioxide plant and a 150 000 Tpa vanadium pentoxide plant. “Our goal is to build the world’s most competitive energy metallurgical SEZ,” said Ning. This development also holds the promise of 20 000 job opportunities.

Public participation meetings were held this week from 14 to 16 September at the old Nancefield community hall in Musina, Mulambwane CPA at Lekkerlag, Waterpoort school, the Makhado show grounds in Louis Trichardt and at the Delta BEC training facility. As part of the process, the Limpopo Department of Economic Development, Environment and Tourism (LEDET) invited interested and affected parties to study the draft EIA report. “This report includes the public participation and impact assessment carried out during the EIA phase of the project. The report also includes proposed mitigation measures for potential impacts identified during the study. A draft Environmental Management Programme (EMP) accompanies this draft,” says LEDET, adding that this report will be available from 1 September to 22 October this year at, among others, the Musina Municipality, Makhado Municipality, Mulambwane Community Property Association (CPA) and from Delta BEC.

Some are getting impatient

What is clear is that those wanting to cash in on the proposed MMSEZ are becoming impatient. At local level, community members started invading one of the farms earmarked for the MMSEZ development, the farm Dreyer (MS 526). They started staking claims on erven on the farm, apparently believing that the erven will have to be bought back from them individually to allow for the SEZ to be developed.

The situation got so out of hand that the Mulambwane CPA had to ask the High Court in Polokwane to intervene and grant them an urgent interdict to prevent further invasions. This interdict was granted by Judge Semenya on 18 August against respondents Azwindini Adyce Mugodo, David Sithagathaga, Mbengeni William Sithagathaga and “all unlawful invaders and developers” on not only the farm Dreyer, but 11 other adjacent farms earmarked for the development. The court order states, among other things, that the respondents must stop “unlawfully invading, hunting, harvesting firewood, occupying, fencing, de-bushing, ploughing, cultivating or building structures (movable or immovable) and/or improving, in any manner whatsoever, any of the farms listed in the order.” The other farms are Antrobus MS 566, Joffre MS 584, Lekkerlag MS 580, Sandstone Edge MS 658, Malaphachi MS 659, Mapani Ridge MS 660, Driehoek MS 631, Van der Bijl MS 528, the remaining extent of farm Steenbok MS 565, portion 4 of farm Coniston MS 699 and Battle MS 585.

Government keen to get the ball rolling faster

Not all are happy with the proposed SEZ

From the onset, some people have been vehemently opposed to the proposed project. Among them is Mr Wally Schultz, well-known local environmental activist and chairman of SOLVE (Save Our Limpopo Valley Environment). He minced no words in response to the meetings that were held this week. “The public participation season for the proposed megatoxic Chinese-sponsored SEZ has begun, and as expected, they are being ‘spun’ to promote the perception that the primary purpose for its construction in the middle of a pristine bushveld wilderness that has barely enough water to support productive farming and the growing tourism industry, is job creation! I have to debunk this widely promoted idea, as a monstrous falsehood. Just as politicians always say what they believe their audience want to hear ... the highly paid consultants have refined that obnoxious ‘art’!” said Schultz in a statement to the Zoutpansberger.

He continued: “Seeing what were clearly ‘bussed-in” youngsters holding their pre-printed boards declaring their support for the MMSEZ and their cry for jobs and watching their expectant faces was heart-breaking. Of course we need jobs and development in our region ... that is a ‘no brainer’ ... but why promise our gullible youth over 20 000 jobs ready and waiting to be filled by them, when it is a blatant untruth...?” said Schultz.

He added that the majority of those jobs would be filled by Chinese nationals. “An admission made by the MMSEZ consultant himself. This MMSEZ is not being constructed for any benefit to local communities, the region ... or nationally. It is a Chinese project being built to serve Chinese commercial interests and to house and provide jobs for Chinese citizens. The self-contained industrial city is, on closer inspection, being built to be self-sufficient, with schools, shopping centres, their own police station ... and housing for their own people. The construction plans show clearly that the residents of this new ‘city’ in the bush will not need to leave their mini Chinese colony to support local business ... and neither will the massive new coal-fired power station be adding one single megawatt of power to our desperately unstable national electricity grid,” said Schultz.

More importantly for SOLVE, said Schultz, is the fact that these consultants are operating on clear instructions to downplay the impact their water-guzzling industrial city will have on the already critically scarce water reserves, and that it will have on the farming and tourism industries, which are the largest employers of locals and have been for as long as memory serves. He concluded with a warning: “We will not allow them to dodge the very real primary questions around their glaringly faulty draft EIA and their yet-to-be-proven water sources - and the literally billions of litres of water they will need to get this industrial city functioning without destroying life as we, the residents of the district, want or expect it to be.”

The DA does not oppose development, but …

The provincial leader of the Democratic Alliance, Mr Jacques Smalle, also added his party’s opinion about the proposed MMSEZ project. He said that they believed sustainable and inclusive economic development in all five districts of Limpopo was the key to poverty alleviation, not only in Vhembe. “In the Vhembe District, prior to the Covid-19 pandemic, the unemployment rate was substantially higher than that of the provincial average of 24.9% when the provincial unemployment rate was at 18.5%. The median age for Vhembe District is 21 years, so youth employment and development need to be prioritised,” said Smalle in a statement to the Zoutpansberger.

Smalle said that if the MMSEZ were well governed, transparent and with a sharp focus on local beneficiation, the Vhembe District could become an economic hub with employment opportunities for all. He said, however, that the DA had serious concerns about the MMSEZ. “The fact that the project was outsourced to China for R40 billion and the involvement of the infamous Yat Hoi Ning raises concern about the legitimacy of the project,” said Smalle. He too was worried about the availability of water. “The lack of water to sustain such a project and the uncertainty around the deal made with Zimbabwe regarding water provision to the project is also a concern,” said Smalle.

Smalle said he felt that the public hearings conducted from 14 to 16 September were premature and founded on a draft IEA that could still be amended. “Water access to the SEZ, the protection of certain biospheres in and around the SEZ and access by road and rail must be addressed in a transparent manner and signed off before public hearings are conducted. The final EIA will only be available in October 2020,” said Smalle. He also stated that clarity must be provided over rezoning areas for residential purposes.

Like Schultz, Smalle also raised the issue of jobs. “For two years the youth in Limpopo were encouraged to submit their CVs for a database for work opportunities that may arise from the SEZ, but to date there is no indication as to what, if any, local beneficiation there was agreed to,” said Smalle. However, not only the issue of local jobs worries Smalle, but clarity on how local business can benefit from the project as well. “There are multiple incentives when companies invest in a SEZ, including preferential 15% corporate tax and employment tax incentives. LEDA should make opportunities available to South African companies, so that funds generated can be reinvested in the country. Currently, only the politically connected seem to be benefitting from opportunities that arise out of the SEZ, like the infamous Coal of Africa and the Premier’s brother,” said Smalle.

Smalle concluded that Limpopo was in dire need of economic investment. “Our expanded unemployment rate is 44.4% and this translates to just under 1 million (986 000) jobless individuals. It is time for the provincial executive to show transparency in the way they manage the Musina-Makhado SEZ, to stop taking shortcuts in its implementation to establish this SEZ and to make this project work for the benefit of the entire province,” said Smalle.

At the beginning of August, community members started invading one of the farms earmarked for the SEZ development, the farm Dreyer (MS 526). They started staking claims on erven on the farm, apparently believing that the erven will have to be individually bought back from them to allow for the SEZ to be developed. The situation got so out of hand that the Mulambwane CPA had to ask the High Court in Polokwane to intervene and grant them an urgent interdict to prevent further invasions. Photos supplied.