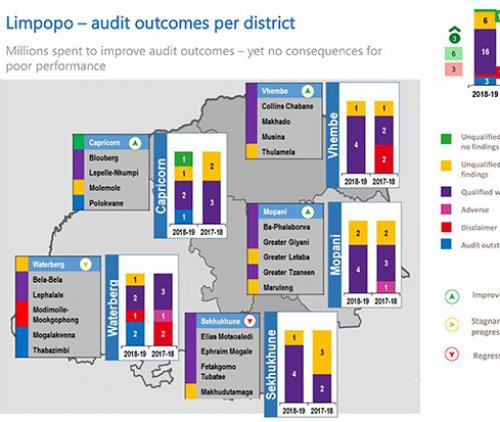 Consultants cash in on Limpopo municipalities

Consultants used by Limpopo municipalities to help sort out chaotic accounting departments seem to be cashing in on the situation, without the taxpayers’ receiving any tangible benefits. In the 2018/19 financial year, the province’s municipalities spent R249 million on consultants, with the Vhembe municipalities accounting for R25,15 million of that expenditure.

Last week, the auditor-general, Kimi Makwetu, released the audit outcomes for local government for the 2018-19 period. This was Makwetu’s last municipal audit report as his fixed seven-year term as the country’s AG comes to an end on 30 November. Makwetu was very critical of the manner in which many municipalities still manage their funds “in ways that are contrary to the prescripts and recognised accounting disciplines”.

He also criticised the excessive amounts spent on external consultants, without skills transfer being prioritized. Makwetu reckons officials tended to become complacent when consultants were hired and therefore not performing the jobs they were appointed to do. “The province relies heavily on consultants, yet there are no controls to ensure that the municipalities receive a return on their investment,” the report reads.

Of the Vhembe-based municipalities, the relatively “small” Musina municipality spent a staggering R8,42 million on two consulting companies. This almost matched the municipality’s total salary bill for its finance department (R8,84 million). Musina also received a qualified audit, with findings. The AG further criticized this municipality for the way its municipal infrastructure grants were spent. A R3 million grant “was not cash-backed, with the result that we were unable to determine whether the grant was used for its intended purpose,” the report states.

Probably the most chaotic of the region’s municipalities, the Vhembe District Municipality (VDM), spent R6,35 million on two consulting firms. This represented 24% of VDM’s salary bill in the finance department of R26,69 million. The municipality improved slightly from an adverse audit report with findings, to a qualified audit with findings.

VDM features prominently in the AG’s report and is criticised for the way it mismanages its water-distribution function. “The district recorded water losses of R204 million, which translates into an estimated 21 million kilolitres of water,” reads the report. VDM was unable to calculate water losses accurately and did not bill for the usage of water in all areas. The ageing infrastructure is also not being maintained, causing water leakages.

The municipality with the largest salary bill for its finance department is Makhado. This municipality spent R28,86 million in 2018/19 to pay officials, yet it had to fork out another R4,87 million to pay two consulting companies to assist. Makhado also received a qualified audit opinion with findings.

The Collins Chabane municipality spent R11,09 million on salaries in its finance department and R2,8 million on two consulting companies. The money spent on experts did not help much with internal control measures and a payment of R900 000 was made to an incorrect supplier. “This was as a result of the inadequate review of payment documents before payments were processed on the system, as the responsible official did not review the correctness of the payment voucher (such as verifying the supplier name, banking details, and services provided). The municipality only managed to recover a portion of the loss, and the outstanding amount of R674 625 resulted in fruitless and wasteful expenditure,” the AG report reads.

The only municipality in the Vhembe district that received an unqualified finding (with findings), is the Thulamela Municipality. Ironically, this is also the municipality that spent the lowest percentage of funds on consultants. Thulamela’s salary bill for its finance department was R20,92 million and it used two consulting firms, costing the taxpayers R2,7 million.

The AG complimented the Thohoyandou-based municipality on the way it spent a R113 million municipal infrastructure grant. “The municipality demonstrated that principles of proper planning and monitoring by project managers lie at the heart of spending conditional grants for its intended purposes. One example is the construction of the 8,5km Thohoyandou N service road. The project is in progress and on track, with a planned completion date of November 2020. Once completed, the community will benefit as using a tarred road is much safer than a gravel road.”

In his report, the AG points out that audit committees are functioning well in most municipalities in the province. Unfortunately, in some instances, weak leadership made the oversight of these committees questionable. “At (VDM), the municipal public accounts committee recommended to council that irregular as well as fruitless and wasteful expenditure relating to prior years be condoned without being properly investigated,” the report states.

VDM is also used as an example where weak internal control measures lead to the abuse of public funds. Bank reconciliations were not performed regularly at VDM and the municipality did not have proactive controls in place to ensure that invoices were only paid once. “During the year, the municipality processed payment for the same invoice twice, amounting to R1 112 748. This was because payments were processed without reconciling them to supporting documentation or because supporting documentation was not stamped as ‘paid’ after making payment the first time,” the report reads.

The ghost of VBS

“The impact of the R1,2 billion loss following the liquidation of VBS Mutual Bank is still being felt by the municipalities concerned, where service delivery has been affected,” says the AG. Eight of the province’s municipalities invested in the mutual bank.

The worst hit by the VBS losses is the VDM, which invested R369 million of its own revenue. “The adverse impact on the district’s ability to deliver services continued in the 2018-19 financial year as the district was unable to pay for repairs and maintenance of water pipes and boreholes, due to the lack of funds, which resulted in water interruptions for citizens and escalated water losses,” the report reads.

At Makhado, where R63 million of the equitable share funds were lost, the effects can still be felt. “The municipality could not fill critical positions to address service delivery objectives, due to a lack of funds, which prevented timely attention to service delivery requests.”

The AG points out that at all the municipalities that invested money with VBS, the officials who were responsible for making these investments were suspended. At Vhembe, Collins Chabane and Makhado, the chief financial officers were suspended and subsequently resigned. The term of the then acting municipal manager for Makhado ended while he was on suspension, with the council taking a decision not to renew his contract.

“The municipal manager of Vhembe District was found guilty of financial misconduct and he subsequently resigned after the council approved a settlement agreement of almost R1 million. When the district municipality was summoned to appear before the Standing Committee on Public Accounts in September 2019, the committee found that such a decision to pay a settlement agreement demonstrated a lack of leadership in the municipality and asked law-enforcement agencies to investigate the matter, which we will follow up in the next audit,” the AG promised.

The mayors implicated in the VBS investments were recalled by the ANC, and the investigation report was handed over to the Directorate for Priority Crime Investigation (Hawks) for further action. “The investigations were still in progress at the date of this report and will be followed up in the next audit.”