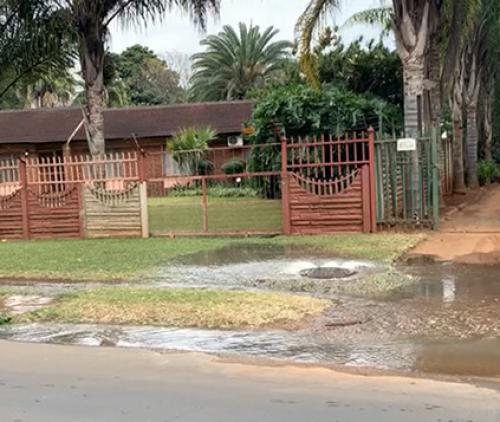 Many residents have remarked over the past couple of weeks that municipal workers also seem to have gone into permanent lockdown regarding service delivery, including essential service departments.

The complaints do not only concern problems with sewage spillages, which fall under the jurisdiction of the Vhembe District Municipality (VDM), but the matter of potholes (especially in Eltivillas, Louis Trichardt), which fall under the jurisdiction of the Makhado Municipality, as well. One specific problem highlighted by residents was the traffic light in Louis Trichardt’s CBD, on the corner on Songozwi and Krogh Street, which has been out of service since the beginning of the lockdown period.

Last week, a list of sewage-spillage problem areas was sent through to the VDM. The most recent of these occurred last Friday morning in Grobler Street, where raw sewage streamed from the manhole cover of a blocked sewer line. Massive amounts of raw sewage washed down the street and into the town’s storm-water drainage system.

“There is a team working in Louis Trichardt to address sewerage challenges,” said VDM spokesperson Mr Matodzi Ralushai on Wednesday. He also assured residents that, during the COVID-19 lockdown period, water and sewer services were getting attention as essential services and reported cases were being attended to by staff and appointed service providers. “The institution is aware about Louis Trichardt’s sewer challenges raised by Zoutpansberger newspaper and affected communities. The municipality apologizes for inconveniences caused by delays in fixing affected areas,” said Ralushai. That they indeed have teams addressing problems was evident as the massive sewage spillage in Grobler Street was cleared on the same day the Zoutpansberger reported it.

Regarding the potholes in Eltivillas, which are at present causing major frustration for the residents of the suburb, Makhado Municipality’s spokesperson, Mr Louis Bobodi, said that the issue were receiving attention. He indicated that the past weekend a team of municipal workers was already out repairing and filling potholes. “Although we are working on limited staff of one third as per the current regulations, they are continuing to attend to potholes. We are going specifically to start with Eltivillas when Level 3 is phased in on 1 June,” Bobodi said.

As for the traffic light, Bobodi said that the current lockdown situation was the main reason why the light was not getting fixed. “The current situation that we are in has had a huge impact for us in terms of getting quotations for the items needed to fix the mentioned traffic light. We have just received the quotes, and we are working on the procurement process,” said Bobodi.

On a positive note, the Makhado Municipality seems to be awakening quickly from their lockdown slumber. Last week already, the payment office for municipal accounts re-opened. Normal refuse removal has also commenced.

From Vhembe’s side, Ralushai invited residents to phone the following numbers for water and sewerage problems: The acting general manager of Technical Services, Mr Eddy Chauke, at 079 668 0502 or the Operation and Maintenance manager, Mr Ailwei Phuthu, at 084 229 52 47.