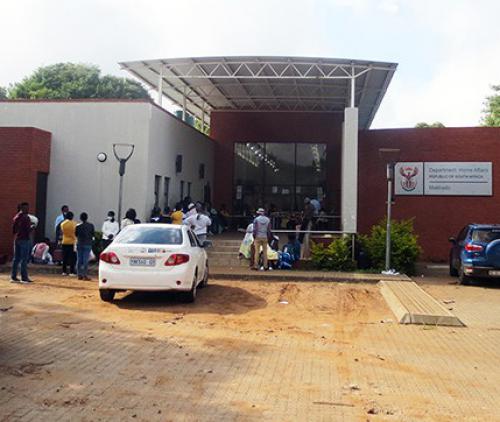 Two offices of the Department of Home Affairs were closed last week, after the department failed to put proper mechanisms in place to ensure the safety of the workers and members of the public. The affected offices are in Malamulele and in Giyani.

Home Affairs offices opened on 4 May, amidst numerous complaints from workers at the various offices in the Vhembe District. “We feel unsafe working in our offices. We resumed duty, but to our surprise the offices and other workspaces were not deeply cleaned or sanitised,” said a Home Affairs staff member from the Vhembe District Offices.

Apparently, the Department of Employment and Labour had issued guidelines for employers to deal with COVID-19 at workplaces. Among the measures are that all work surfaces and equipment be disinfected and all areas such as toilets, common areas, door handles, and shared electronic equipment be cleaned and disinfected regularly. Sanitiser must be available for use by employees or anyone who visits the workplace.

Department of Home Affairs (DHA) employees at their Makhado and Malamulele offices confirmed that no deep cleaning or disinfecting of the workplaces had been done before they resumed work. “We have reported for duty, but we feel unsafe. As we walked into workplaces, no screening was done. This is a worrisome working environment,” said a worker at Makhado Home Affairs.

Another worker at the Malamulele Home Affairs office said, “We have already been working in appalling conditions at this place. Since last year, we have had no running water, and this forces us to use alternative places such as the bushes. Now, come this virus, it would mean we are not safe at all.”

The Public Service Association, the union representing some of the workers, expressed concern about the DHA’s recalling of workers before workplaces had been disinfected.

“The department is forcing members to open the offices as if it is business as usual. It must be noted that failure to comply with safety regulations is not only irresponsible, but also illegal in terms of the Occupational Health and Safety Act,” reads a statement by the PSA general manager.

The PSA urges its members not to enter unsafe work environments, such as offices that have not been deep cleaned and with no screening of employees and members of the public.

Mr Albert Matsaung, the Limpopo Department of Home Affairs’ provincial manager, said the safety of employees was a priority. “We have supplied all 619 DHA employees in the province with masks and sanitizers. Each employee has a 500ml container of sanitizer and each office has been supplied with a 25-litre sanitizer for refilling,” said Matsaung.

Asked about disinfecting workplaces, Matsaung said the province was busy with quotations and promised that by Thursday (7 May) all workplaces would be disinfected.

Regarding the toilets at Malamulele, Matsaung said staff toilets were working but public toilets were being attended to.

Late last week an announcement was made that the Malamulele and Giyani offices had been closed because of non-compliance with the Occupational Health and Safety Act. A statement from the PSA’s provincial manager says that the Department of Employment and Labour had conducted an inspection and a prohibition notice had been issued.