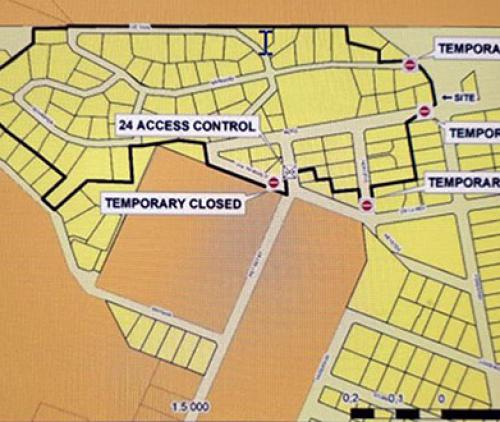 A map that was provided to residents, showing the erven included in the project.

“Skuldbult” to be fenced off?

Plans are afoot to erect a fence around a large part of the residential area on the north-western side of Louis Trichardt. The area, often referred to as “skuldbult” (debt hill) may soon be sealed off, with access only via a gate in Piet Retief street that will be manned by security guards.

The project to try and improve security in the area is driven by the Schimper Heights Homeowners Association. Last week, letters were emailed and hand-delivered to the residents in the area in which details of the project are made available.

“Due to the worsening safety and security situation in Makhado, a number of residents resolved to apply to the Makhado Local Municipality for permission to establish access control (security control) measures at the entrances to parts of Louis Trichardt Ext 1 & Ext 7,” the letter reads.

If the plans are approved, the entrances to Hertzog, Van Warmelo, Bergh and Barnard Street will be closed off. A fence will be erected on the northern, western and southern side of the area.

“In order to prepare such an application and eventually obtain approval from the municipality, at least two thirds of residents within the area will have to give written consent for the proposed security measures to be implemented,” the letter reads. This means that 55 of the 81 homeowners need to give consent.

The cost of the project also needs to be absorbed by the homeowners. A Section 21 company will have to be established that will oversee the project and be responsible for the monthly expenses. The estimated cost of the project is just over R508 000. It involves putting up a fence, installing security cameras and building a guard house. This amount includes consultancy and engineering fees, the cost of the doing a traffic impact study and legal fees.

In the proposal sent to homeowners, each member will have to pay an estimated once-off fee of R6 283 and a monthly levy of R382,10.

Residents in the area now have to indicate whether they support the project or not. They have until 28 March 2020 to return the forms. The project was initiated by Mr André Prinsloo of Optimprops. The Technical Lead Agent is Mr Christian Mocke of Osglo Architects and the town planner involved is Mr Theo Kotze of Developlan.