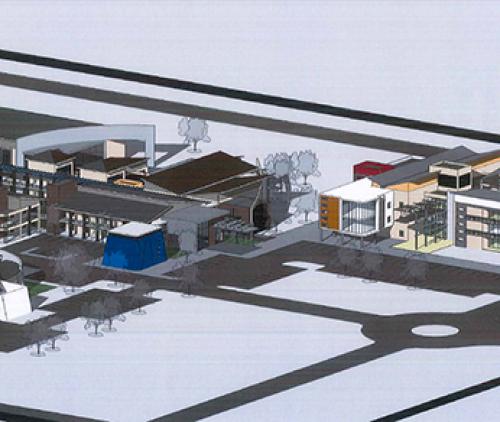 An artist's impression of the new campus.

It may take another two and a half years before the University of Venda's satellite campus in Louis Trichardt opens its doors, but prospects are that some short learning programmes may start any time from now.

During a meeting held at the Makhado Show Grounds on Tuesday, Dr Thakhani Takalani, head of Univen’s Centre for Continuing Education at the Univen Innovative Growth Company (UIGC), lifted the veil on the university’s latest project.

Takalani, along with UIGC's CEO, Dr John Mudau, assured stakeholders and community members that the project's planning had reached the maturity stage and that there was no turning back. The artist’s impressions of the satellite campus have been designed, but it was still open for additions, based on any suggestions from other stakeholders. Among other facilities, it will provide accommodation for 50 staff members and 300 students.

This project is a partnership between the Makhado Municipality and the University of Venda. The municipality had donated the land on the Remainder of Portion 7 of the Farm Bergvliet 288LS, located east of Leeu Street. The university will acquire a title deed for the property in its own name.

Through its commercial wing (the UIGC), the university aims to start offering short learning programmes as part of phase one of the project any time from now. The programmes include Agricultural and Food/Consumer Sciences, Business Management and Entrepreneurship, Education and Teacher Development, Environmental and Natural Sciences, General Management and Responsible Leadership, Human Resources Development and Labour Relations, Information and Communication Technology, Marketing, Communication and Customer Relations, Project and Risk Management, Public Service and Administration, Social, Political and Religious Studies, Supply Chain and Logistics, and Safety, Health, Environment and Quality (SHEQ).

“Phase two of the project will entail bringing the School of Management Sciences and the School of law,” Takalani said. Prospects are that other faculties might also offer courses at the satellite campus.

In the project presentation sheet that was made available to Limpopo Mirror, the statement is made that the proposed project is based on the “need” and not the “cost”. “However, an estimated cost of R2 billion rand is projected,'” it reads. “The University of Venda will be responsible for raising the resources to achieve this unique legacy and partnership project.”

Members of the community and other stakeholders were invited to make input during Tuesday’s meeting. One of the attendees, Kutama Traditional Council's Thovhele Vho-Vele Kutama, said that the campus should consider offering leadership skills to traditional leaders. He felt that courses in dispute resolution might assist traditional leaders in dealing with disputes in the traditional courts. “We also request you to fully include the traditional leadership's representative in the project task team, so that whatever decision is taken becomes really inclusive,” Thovhele Kutama said.

While it is not clear at this stage as to when the construction project for the satellite campus will start, the UIGC team said that everything depended on some variables, but once the projects started, it would take two and a half years to complete. However, the date for the construction project of the satellite campus, together with final information on the start of short learning programmes at the temporary satellite setup at the show grounds, will be communicated by the end of March this year.