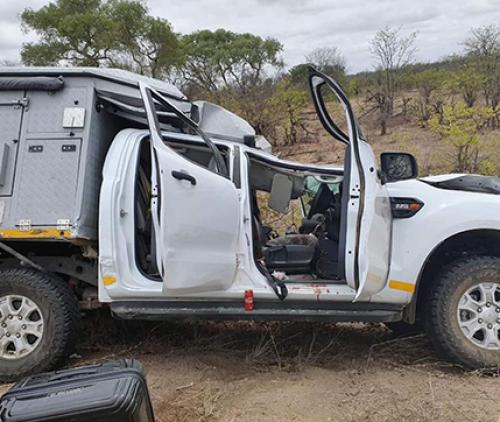 The severely damaged rental safari vehicle after the giraffe had landed on top of it. The driver of the bakkie, a Swiss national, was critically injured in the accident, while his wife sustained minor injuries. Photo: SANParks.

With the Kruger National Park literally on their doorstep, many residents of the Soutpansberg enjoy visiting the park for some relaxation. The last thing one would expect is to come upon an accident scene that has left a tourist seriously injured and a giraffe killed on impact.

This is exactly what happened to Louis Trichardt resident Mr Leon Klaff. Whilst enjoying the peace and tranquillity of the park, he was one of many visitors to the park to come across a serious vehicle accident on the road between the Shingwedzi and Mopani Rest Camp just minutes after it happened on Sunday morning.

According to SANParks, a minibus-taxi with 13 day visitors collided with a giraffe that stepped into the road in front of the minibus. The driver of the minibus slammed on the breaks, but still managed to hit the giraffe. The giraffe became airborne and fell on top of a rental safari vehicle travelling in the opposite direction. The driver of the rental vehicle, a Swiss national, was seriously injured while his wife suffered minor injuries. Both had to be transported to Marula Med in Phalaborwa, after which the man was airlifted to Nelspruit due to the serious nature of his injuries. The driver of the taxi and one of the passengers were reported to have been slightly injured in the crash.

The accident caused a furore on SANParks’ Facebook page, with people attributing the accident to speeding and the lack of traffic-law enforcement in the park. Klaff said that, just moments before, the taxi had allegedly overtaken vehicles at high speed. “I counted 47 paces of skid marks,” said Klaff, referring to the skid marks left on the road when the driver of the minibus had slammed on the breaks.

SANParks spokesperson Mr Ike Phaahla told the Zoutpansberger upon enquiry that the case had been handed over to the South African Police Services. “They are the responsible authority to investigate and decide on what actions to take and if anyone needs to face charges,” said Phaahla.

Phaahla confirmed that the speed limit in the area where the accident took place was 50km/h. He did not want to make any statement regarding allegations that the minibus taxi was speeding. “We are leaving that to the investigating team,” said Phaahla.

From comments on the park’s Facebook page one can gather that the issue of vehicles speeding in the park is a serious one. “There is a general problem of people not observing the rules of the road and not being vigilant. We do have tourist monitors, but they can’t be everywhere. As you probably know, the KNP is a vast area. We have advisory notes on our entry permits and urge people to be extra cautious on the tourist routes,” said Phaahla.

Having said this, Phaahla said they did try and address the problem on a continuous basis. “We do speed traps and fine offenders,” said Phaahla. He added to this and said that 35 visitors to the park had received traffic fines the past year.

The damaged minibus-taxi after it hit the giraffe, causing the giraffe to become airborne and landing on an oncoming rental safari vehicle. Photo: Leon Klaff.

The giraffe (left) was apparently killed on impact after being struck by the minibus-taxi and landing on the roof of a rental vehicle travelling in the opposite direction. Photo: Leon Klaff.