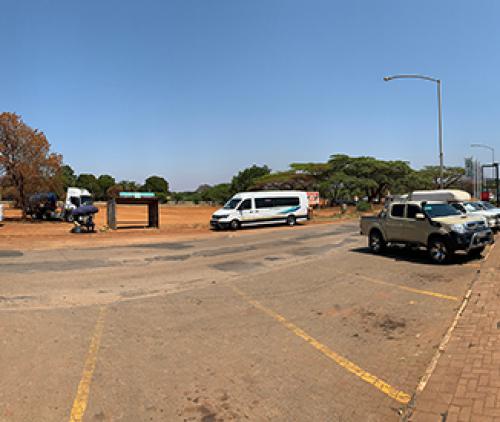 The park opposite Spar in the new extension was sold to two developers.

Municipality sells park, but something smells

Earlier this year, the Makhado Municipality sold one of the few remaining public parks in Louis Trichardt to two developers. The secrecy surrounding the transactions and the way the bids were awarded, have raised eyebrows.

The park at the centre of the controversy is surrounded by Baobab Street (opposite the Soutpansberg Spar shopping centre), is adjacent to the N1 and used to be an open space in a residential area. Lately it has become an eyesore, with trucks trying to use it as a parking space and vendors selling off goods that include anything from garden ornaments to fresh produce. Construction companies also used it as a temporary dumping site.

In July 2018, the Makhado Council approved a proposal to sell ERF 1952 and ERF 3456 by means of a public tender. The resolution to dispose of municipal property came with a number of conditions. The first was that the municipal valuer should determine a market-related price on the properties to ensure that it would not be sold below its value. Secondly, the successful bidders would have to rezone the properties from their current “municipal” status to the intended use.

Thirdly, the properties would need to be developed within three years after the sale, but council might allow a further two-year extension, if so requested. A further condition recorded in the council minutes states that the new landowner must pay all property rates due to the municipality with retrospective effect from 1 July 2008. The date is possibly a typing error and should probably be July 2018.

The expectation was that, following this decision by the council, proper procurement procedures would be followed. Legislation such as the Public Finance Management Act (PFMA) and the Municipal Finance Management Act (MFMA) prescribes procurement processes and the courts have also supplied guidelines to municipalities. The legislation and guidelines force municipalities to implement transparent, cost-effective and competitive tender processes. The responsibility is on municipalities to achieve maximum value for money and to combat fraud.

The call for tenders was only advertised once, on 18 January 2019, in a combined advert that appeared in the Limpopo Mirror. The cut-off date for tender submissions was 1 February 2019. No other adverts could be traced, not even in the provincial gazette.

In July, rumours started doing the rounds that the park had been sold. The municipality was contacted early in August to find out who the buyers were and what the selling prices were. After waiting for almost a month for answers, the paper contacted the municipal manager and asked whether filing a Public Access to Information request would be necessary. The municipality’s spokesperson, Mr Louis Bobodi, then took it upon himself to liaise further and try and obtain answers. Last week, the necessary documentation detailing the bids was published on the municipality’s website.

According to the list provided by the municipality, eight bids were received for ERF 1953. This is the bigger part of the park but furthest away from the N1. The lowest bidder was C Matodzi, coming in at R1,2 million, with a company listed as Ice burg, trading as 751CC, submitting the highest bid of R2,3 million. The bid was, however, awarded to a company listed as Trendy Tiles & Sanitary Ware, who offered R1,85 million. Bobodi confirmed that the bid of Trendy Tiles & Sanitary Ware had been accepted but did not say why the higher bid of Ice burg had been rejected.

Who are the bidders?

A search for a company by the name of Trendy Tiles & Sanitary Ware in the database of the Companies and Intellectual Property Commission (CIPC) produced no results. The closest match was a Laudium-based company called Trendy Tile Warehouse. This company, however, was in the process of deregistration.

One of the legal requirements for a procurement process is that all bidders must provide a tax-compliance certificate. This must be submitted along with the other documentation. Council’s spokesperson was asked why the name of a business had been provided as buyer of the property whereas the company was not listed on the CIPC database. At the time of our going to press, Bobodi was still awaiting answers from the relevant departments.

The second part of the park, ERF 3456, was sold to Banyana Enterprise, who put in a bid of R1,2 million. Documentation shows that eight companies had put in bids for this property, with the highest bid being that of Southern Ambition 1478C, who offered R1,6 million.

Bobodi was asked why the lowest bidder, Banyana Enterprise, had been awarded the bid. “There was no highest bidder on ERF 3456 as there was only one qualifying bidder,” he stated. Bobodi was asked whether any reasons could be provided for why the other bidders had been disqualified. This seemed very peculiar, since some of the bidding companies appear to have excellent credentials, especially as far as developing previously disadvantaged groups is concerned.

A CIPC search on Banyana Enterprise also provided some challenges. According to the CIPC records, two companies are listed under that name. Both companies were registered early in 2018. The Banyana Enterprise registered in March 2018 has Ester Mhlongo listed as sole director and is based in Mbombela. A month later, another company going by that name was registered, with the only active director being listed as Nelson Lobelo, who hails from North West.

Because of the uncertainty as to who the real new owners are, contacting any of them to find out what their plans are for the properties was impossible.

Is the development viable?

One of the questions sent to the municipality concerns the viability of a commercial development in such a residential area. A major problem that residents currently have to deal with is the traffic congestion at the entrance from the N1’s side. As things stand, residents complain of having to wait long periods for buses and trucks that block all traffic when trying to access the area.

“Council will communicate with SANRAL for advice, depending on the type of development to take place,” said Bobodi. He added that no rezoning processes had started yet. Part of this may entail environmental impact assessments. “A notice would be put in place for members of the public to make inputs,” said Bobodi.