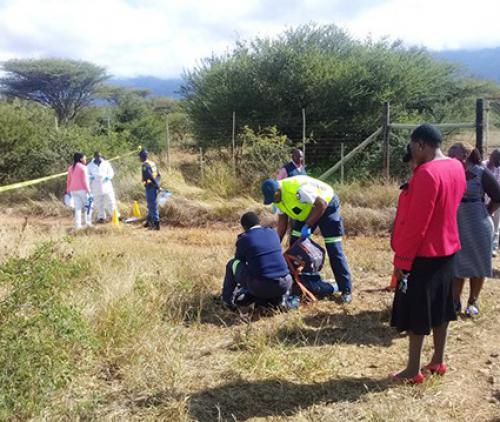 Police on the scene where Netshivangani’s lifeless body was found in May 2017. Matshikiri stabbed her 12 times. Photo: Limpopo SAPS.

The 44-year-old Nkhumeleni Matshikiri was convicted last week of murdering his girlfriend for not giving him a satisfactory answer to a question.

On the morning of 3 May 2017, the lifeless body of Ms Luambo Jennifer Netshivangani (26) of Madombidzha was found next to the railway line along the Schoemansdal road near Tshiozwi. She had been stabbed 12 times with a knife.

The police investigation led investigators to Matshikiri, her boyfriend at the time. He later handed himself over to the police and on 10 May of that same year made a written confession to stabbing Netshivangani to death.

What should have been an easy conviction for the State turned into a protracted trial, with Matshikiri changing his plea to not guilty, claiming that his initial written confession had been given under duress.

The case ended up being somewhat of a trial within a trial, with the court having to decide over the legitimacy of the original confession. Matshikiri made several court appearances, with his case being postponed numerous times. All the while he remained in custody. At one stage, Matshikiri also claimed that he had an alibi for not killing Netshivangani and called a witness to back up his claim. The court was not impressed with this claim, ruling that both Matshikiri and his witness’s testimony were totally untrustworthy.

Matshikiri’s court charades came to an end on 31 July when the Louis Trichardt Regional Court found him guilty of Netshivangani’s murder, allowing his original written confession into evidence.

In his confession, Matshikiri stated that on 30 April 2017, he accompanied Netshivangani to her home for the weekend. On the morning of 1 May, Netshivangani told him that she was going to work in Louis Trichardt and Matshikiri went back to his kraal.

Matshikiri stated that later that same day, he realised that he still had Netshivangani’s house key and went back to her place at about 18:00. She was nowhere to be found. He then drove to Hamatsa (Nzhelele) where he had another girlfriend.

At about 13:00 on 2 May, Matshikiri stated, Netshivangani had phoned him. He then drove back to unlock her house since he had the key, picking her up along the way. “After a while, while we were in my motor vehicle, I asked her about her whereabouts the previous day. She did not give me a satisfactory answer and I became angry. It was then I drove my motor vehicle, together with her, towards Tshiozwi location next to the railway line, where I stabbed her to death,” reads Matshikiri’s confession. He added that after stabbing Netshivangani, he had left her next to the road, driven back to his residence and dumped the knife in an outside pit toilet.

Because murder is subject to a minimum sentence of 15 years for a first offender, Matshikiri’s sentencing was postponed for the completion of a pre-sentencing report. His case was placed on the court roll for 26 to 28 Augusts this year for sentencing. In the meantime, he will continue to remain in custody.