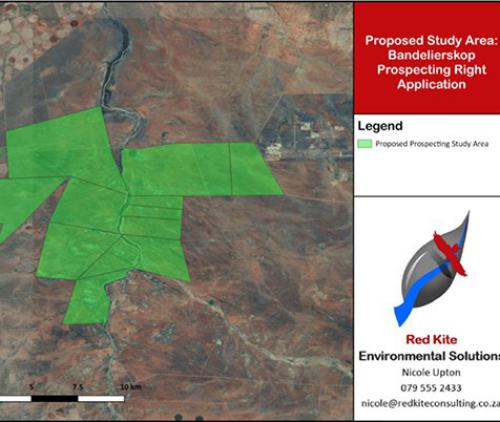 Several landowners were left with more questions than answers after a meeting between them and environmental consultants Red Kite Environmental Solutions over a proposed prospecting-right application in the Bandelierkop area.

From the onset, the meeting at the Adam’s Apple Hotel last Wednesday, 24 April, was characterised by confusion. Nobody still really know whether they attended an information session or an actual public-participation meeting as required by law.

During the meeting, Red Kite was very vague about the details of the prospecting application, including who the actual applicants are. Numerous important documents were also not made available to all the affected landowners, which included a full copy of the basic assessment report (BAR). So confused were landowners that many of them initially though it was Red Kite themselves who were the applicants. To top everything off, some affected landowners only received notice that they could register as an affected party after the closing date of 10 April.

The proposed prospecting-rights application is for the farms Onlust 339 LS, Leeuwdrift 342 LS, Waerkum 302 LS, Welbedacht 346 LS, Vergenoeg 347 LS, Arras 1222 LS and Welkomthuis 343 LS, as well as portions of the farms Grutz 308 LS and Annaskraal 341 LS. The proposed project area is 34 km south-west of Louis Trichardt and 20 km north of Bandelierkop. The extent of the area proposed to be prospected equates to 9 951.20 ha and the minerals to be prospected for will be chromite, nickel, copper and cobalt. “Following prospecting, the drill holes and disturbed areas will be rehabilitated,” stated Red Kite in their presentation.

The proposed project entails three diamond drill holes up to a maximum depth of approximately 400m, as well as the establishment of three site camps (432m³ total), including an equipment storage area (100m³ total), drill sites (75m³ total), and ablution facilities (portable toilets) (6m³ total). Clearance of vegetation (432m³ total) will also be required for the establishment of the drill sites, site camp and ablution facilities.

One of the confused landowners was Mr Kenneth Ball. He told the Zoutpansberger that although he was not against development in the area, such development should take place in a legal, moral and ethical manner. “I'd like to state that I am not definitively objecting to the development as I have regard for economic upliftment. However, I believe that no individual or property owners should be inequitably or unreasonably burdened by a development that could possibly be in public interest,” said Ball. Prior to the meeting he submitted a lengthy property-rights document to be distributed to the affected parties to inform them of the impact the approval of a prospecting right would have on a property. Red Kite did not distribute the document, which, said Ball, placed a question mark over their intentions.

“It is my opinion that interested and affected parties have not received moral or ethical fairness in respect of public participation,” said Ball. He was referring to the method and effectiveness of the notifications by the environmental consultants (Red Kite), as well as inconsistencies in the information provided to interested and affected parties. “Regrettably, this has created unnecessary inconsistencies that have provoked fear in respect of procedural fairness,” said Ball.

Ms Erika Helm, agricultural representative for the Bo-Brakrivier Farmers Association, was also very outspoken on the confusing meeting, as well as the BAR. She was one of the few who had access to the BAR. “The reference number that has been stipulated on the Basic Assessment Report forwarded by Red Kite Environmental Solutions is LP 30/5/1/1/3/2/1 (13298) EM, although the reference number on the letter of the Department of Mineral Resources, dated 4 March 2019, is LP30/5/1/1/2/13298PR.  It is clear this information is incorrect, and we as Interested and Affected parties consider this information as a deliberate action to misinform the parties in this regard,” states Helm in her response. She also points out: “In the report, the detail of the EAP is attached per Appendix 2 for more information.  Unfortunately, Appendix 2 is the Proof of Site notices. The report is in this sense incorrect and this creates misinformation as the information must be seeked (sic) in the report,” and “The Location of the overall Activity is Appendix 3 for the locality map.  Unfortunately, Appendix 3 is the Proof of Advertisements placed.  Once again, the report is incorrect, and information must be seeked (sic).”

Helm’s eight-page response goes on to raise numerous other issues regarding the BAR. She states that the BAR consists of 103 pages, with an additional 70 pages of maps and 100 pages of additional information. “This report was not available to most people, and even if they got it at the meeting, they would not have had a chance to study it to make an informed decision,” said Helm.

Following last week’s confusing meeting, Red Kite themselves applied for an extension of time to the Department of Mineral Resources (DMR) for affected parties to study and respond to the BAR. “While we eagerly await the department’s feedback on this request, we would like to provide the following allowance relating to the Public Participation Commenting Process: We will be granting additional opportunity for commenting on the Basic Assessment Report. Initial notifications indicated that 30 April 2019 was the last day for commenting. Commenting will now be open until Friday, 3 May 2019, pending a response from DMR concerning the request for extension. Should a response not be received from DMR by Monday, 6 May 2019, which is the prescribed deadline for us to submit the Final Basic Assessment Report for the Department’s consideration, commenting will be reopened until such a time as a response is received,” Red Kite states in an email to affected parties.

In the meantime, people such as Ball still want to know what meeting they actually attended last week. Was it an information session or a public-consultation meeting? Questions regarding the nature of the meeting and, among others, clarity on who exactly the applicants are were submitted to Red Kite by the Zoutpansberger. At the time of our going to press they had yet to respond.