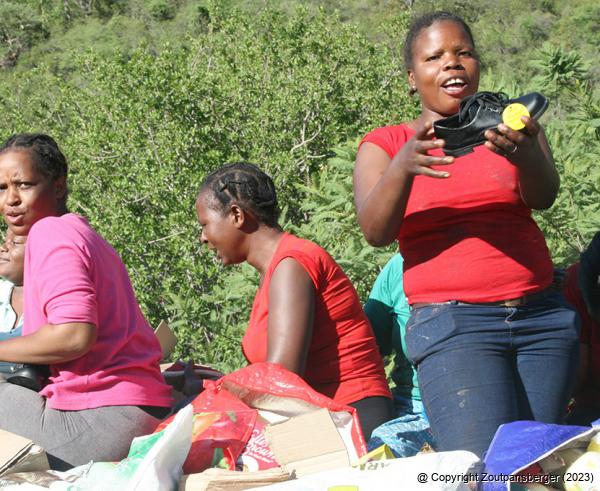 An accident on Tuesday did not seem to faze the looters as they swiped, among other things, stationery, new shoes, maize meal and mayonnaise.

On Tuesday morning, members of the public took advantage of an accident on the N1 north when they shamelessly looted the spilled cargo from a truck.

A truck, destined for Zimbabwe and overturning near the Hendrik Verwoerd tunnels, was interpreted as an open invitation to steal. The truck was carrying a load of stock that was clearly intended for a shop.

According to information the newspaper received, the driver of the truck lost control, which caused the truck to overturn. No serious injuries were reported. The normal flow of traffic was held up for a couple of hours in order for a tow truck to remove the truck's wreckage.

The accident did not, however, seem to faze the looters as they swiped, among other things, stationery, new shoes, maize meal and mayonnaise. Some of the looters got upset when they realised they were being photographed, while others did not seemed the least bit upset and even displayed their spoils.

The fact that the looting apperently occured in full view of local police was raised with the Makhado Police. At the time of our going to press, the police had yet to respond to questions.