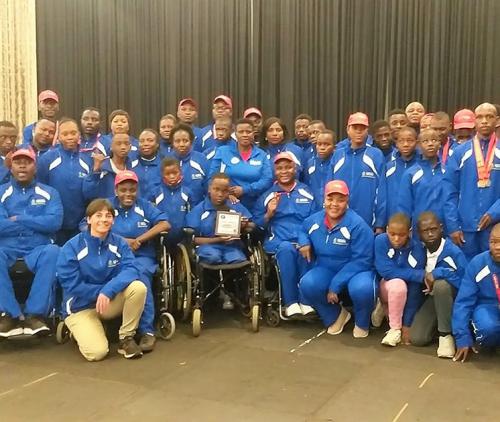 The group of medallists who participated in the recent 2022 Toyota SASAPD National Championships that took place in Gauteng from 18 to 22 March. Photo: Isability Sport Club.

The Limpopo Province fielded a team of 47 para-athletes in the recent 2022 Toyota SASAPD National Championships that took place in Gauteng from 18 to 22 March, with Limpopo’s junior and senior athletes participating in the para-athletics track and field as well as goalball events.

Limpopo brought back a sizeable medal haul of 38 in total, including 18 gold, nine silver and nine bronze. The junior section of the team came second overall on the medal table out of the nine provinces, and the Limpopo junior and senior combined team won the percentage award (most medals per athletes entered) overall.

The senior athletes’ convenor for the Limpopo Sport Association for the Physically disabled, Sandy James, mentioned that, given the challenges caused by two years of Covid restrictions, seeing how development of sports for people with disabilities in Limpopo was taking off was very encouraging.

“The team grew from five seniors in 2021 to 20 seniors in the 2022 team, with 27 juniors from various schools and municipal districts in Limpopo, whereas there were no junior participants in 2021,” said Sandy.

Participating at the Germiston Stadium, the senior para-athletic members achieved four golds, four silvers and five bronzes. These seniors have been hard at work, training with the assistance of the Isability Sports Club (also known as the Isability Parasport Federation for Limpopo). Louis Trichardt paralympic medallist Sheryl James accounted for two of the golds (100m and 200m sprints), while Mathye Madala from Phalaborwa earned gold in the men’s’ wheelchair javelin and Amukelani Makhubela earned gold in the men’s F38 shotput event. “The senior athletes expressed their gratitude to two local schools in Louis Trichardt in the Vhembe District, Emmanuel Christian School and Louis Trichardt High School, for making their facilities available to them for training in the run-up to the champs,” said James.

Shining for the juniors, the following athletes brought back gold for their province: Ishmael Nkuna (two golds in the U/20 100 m and 200m), Phuti Matlala (U/17 long jump), David Malakapatu (two golds in U/14 wheelchair shotput and discus); Mpho Ngobeni (U/20 javelin); Nonhlanhla Maponya (U/17 100m); Thato Mafeto (two golds in U/17 wheelchair shotput and javelin); Kamogelo Moagi  (100m open women T38),  Moake Mokgethwa (U/17 shotput); Intelligent Thobejane (U/17 100m T13) and Letago Kgwethe (U/14 100m). In the Goalball event, the Limpopo men’s senior team achieved victory with gold in the finals and the junior goalball boys achieved bronze overall.

The team, together with managers and officials, was hosted in the luxurious Birchwood Hotel with the other provinces.  They all expressed sincere gratitude towards the Limpopo Sport Confederation, Limpopo Department of Sports, Art and Culture, Limpopo Sport Academy, and IsAbility Sports Club Limpopo, for assisting and facilitating with excellent accommodation, sporting attire and other logistics that contributed towards making the 2022 nationals an exceptional experience for Limpopo.