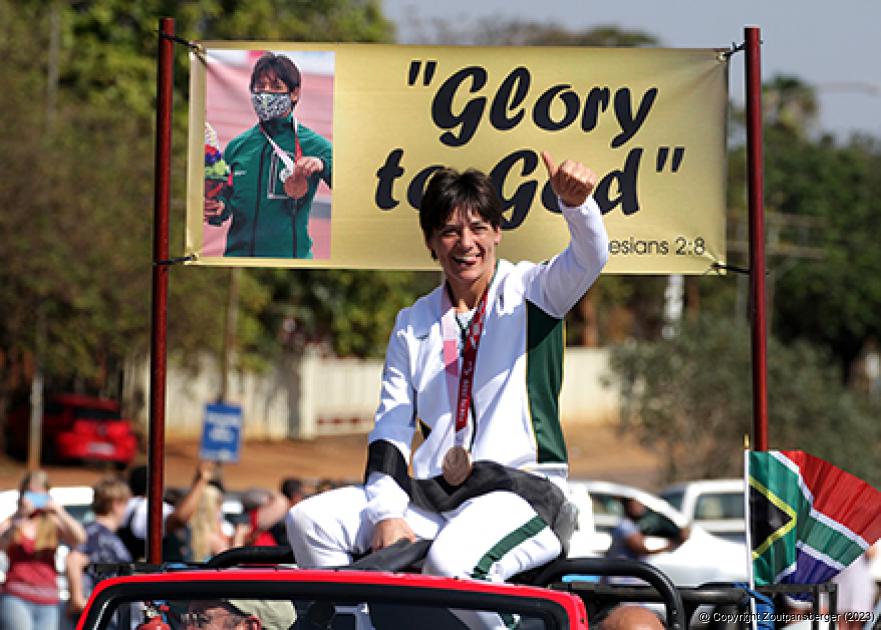 Sheryl clenches her tongue between her teeth, something that has become somewhat of a trademark for her, as she waves to the crowd. She is not shy to give all glory for her achievements to the Lord.

Residents gave Paralympic bronze medallist Sheryl James a hero’s welcome on Sunday when she returned to her hometown of Louis Trichardt, following her participation at the Tokyo Summer Paralympic Games in Japan.

And what a proud moment it was for Louis Trichardt and South Africa as a whole when the 35-year-old Sheryl won a bronze medal in the 400m T37 race for women on 1 September! Her road to becoming a Paralympic medallist started on Friday, 27 August, when she just missed out on a podium place in the 200m race for T37 women. She finished fourth in the event in a lightning-fast time of 27.57 seconds. Despite her fourth place, Sheryl set a new Africa record in the event, just hours after smashing the previous Africa record of 27.73 seconds in the same event during the 200m heats. This amazing athlete formed part of the 34-member South African Paralympic team that ended up bringing home four gold medals, one silver medal en two bronze medals, finishing 34th overall in the medal standings.

“It was an incredible experience! Beyond words! It was amazing and none of it would be possible if it was not for the people back home who did all the work and put in all the time. You know, my family, my coach, the team at home in Louis Trichardt. If it wasn’t for them and for SASCOC (South African Sports Confederation and Olympic Committee), everybody involved, all the sponsors, NONE of this would have taken place. I would not have had the opportunity to run and win a medal. A great thank you to them for sticking it out with me!” said Sheryl shortly after touching down at OR Tambo Airport on Saturday morning.

Scores of residents and cars lined the N1 on Sunday afternoon as Sheryl arrived back in Louis Trichardt amidst sheers of jubilation and the deafening sound of car horns being sounded while the South African flag was proudly waved. Even Makhado Mayor Samuel Munyai was there to congratulate Sheryl on behalf of the municipality and its people.

Following Sunday’s welcome-back event, Sheryl expressed her extreme gratitude towards all who attended. "Thank you seems inadequate! Louis Trichardt made my welcome home simply unforgettable. I am deeply humbled and very proud to be a Limpopian and an even prouder Louis Trichardter. The local newspaper seems the fitting platform to say thank you because I don't have everyone's names … there were so many arrangements and logistics that took place ... the energy was electric. Everyone may believe that I have inspired them, but I find my inspiration in every person from my hometown. So, thank you ever so deeply,” said Sheryl. She added that she looked forward to whatever came next, so that the community could grow together. “I have come to understand how even the most seemingly insignificant act of kindness can change a life forever, and this is priceless. I believe that the people of Louis Trichardt are doing that every day," said Sheryl.