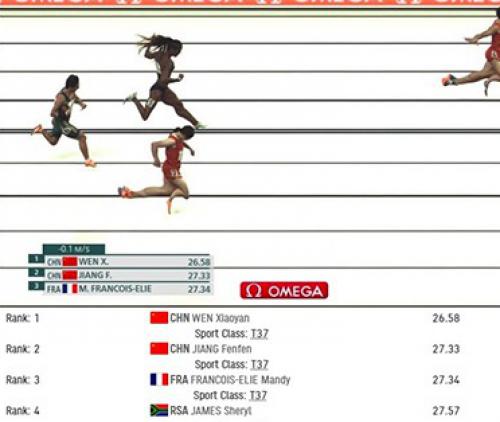 Sheryl James (left) just missed out on a podium place in her first event at the Tokyo 2020 Summer Paralympic Games finishing fourth in the 200m event for women. Her time of 27.57 is not only a new personal best for her, but also a new Africa record. Image supplied.

Local Paralympic star Sheryl James is truly shining at the Tokyo 2020 Summer Paralympic Games in Japan, just missing out on a podium place in the final of the 200m for T37 athletes earlier today.

Sheryl finished fourth in the event in a lightning-fast time of 27.57 seconds, a fraction of a second slower than French athlete Mandy Francois-Elie in third place in 27.34 seconds and Fenfen Jiang from Chine in second place in 27.33 seconds. The overall winner of the event was Xlaoyan Wen, also from China, in a blistering time of 26.58 seconds.

Despite her fourth place, Sheryl set a new Africa record in the event just hours after smashing the previous new Africa records of 27.73 seconds in the same event during the 200m heats. This is no small feat for this 35-year-old Louis Trichardt athlete, taking into account that she trained at High School Louis Trichardt’s grass track, unlike most of the other athletes who train on artificial surfaces. Her trainer is local resident, Gideon Joubert and her whole support team consist of local residents.