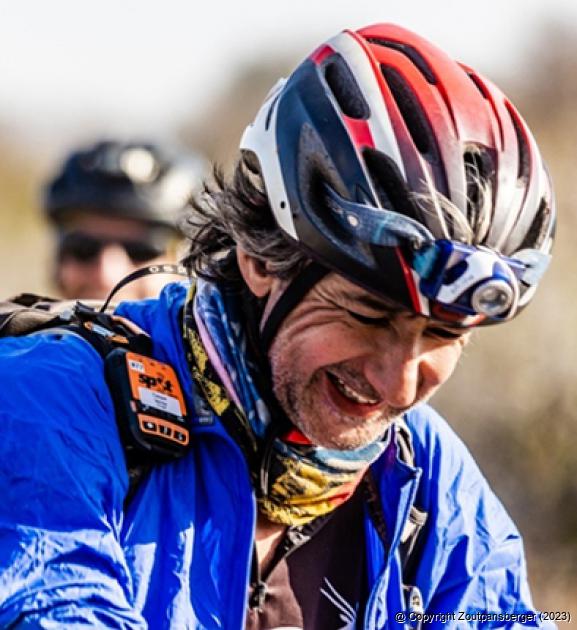 Dr Casper Venter in good spirits as he makes his way from Pietermaritzburg to Wellington in the Western Cape as part of the gruelling Freedom Challenge over a distance of 2 150km. Photo: Llewellyn Lloyd/Reblex Photography.

Dr Casper Venter’s hopes of completing the gruelling Freedom Challenge in 15 days dwindled dramatically this week when a stomach bug kept him out of the race for two days.

By Wednesday this week, this well-known Louis Trichardt adventurer, cyclist and medical doctor was trying to make up for lost time as he passed the 1 700 km mark of his journey. He started off in Pietermaritzburg on 1 July on what can easily be described as one of the toughest challenges in South Africa, if not in the world. This is a race that takes the cyclists across the icy cold mountain slopes near Lesotho, down to the Eastern Cape and eventually finishes in Wellington in the Western Cape. The route stretches across 2 150 gruelling kilometres, and cyclists ride unassisted and mostly on gravel roads and single-track sections. They need to have exceptional navigation skills, using only maps, and need to carry the essential stuff such as food for the day and clothes with them.

A total of 56 riders embarked in batches from Pietermaritzburg, but thus far many of them have had to retire. According to the 13 July race report, the remaining peloton is now stretched over a shorter length, but all are engulfed in the grips of the extreme winter weather. “Riding in extreme cold is foreign to most South Africans, and I bet all of our racers will have experienced their toughest of days on a bike recently. The combination of wind, rain, cold and difficulty can make every kilometre forward that much harder. The weather is always a lottery in this race, and even though the high altitude of the Malutis from Rhodes to Cradock is traditionally the coldest, a thick cold front in the Western Cape can instantly deliver a tougher sting in the tail that the exhausted riders have to overcome. A convenient lift to the finish is now very enticing, and the riders stay out there to earn that blanket – it’s hard to describe (you just have to do it),” the report reads

As Casper neared the 1 700km mark of his journey on Wednesday, race favourite Fjord Jordaan was nearing the completion of his race with 2 115km behind him. By that time, he had already spent 13 days on the road, of which 10 in the bicycle saddle. Casper had also spent 13 days on the road, of which only six days were in the saddle. He still had a gruelling 400 kilometres plus to go by Wednesday evening.

For those wishing to follow Casper’s progress, visit https://freedomchallenge2021.maprogress.com/#.