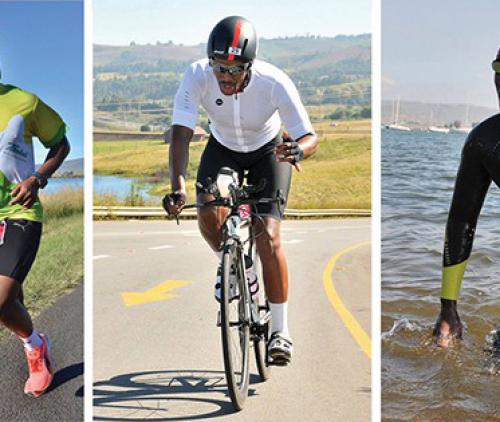 Maj Selaotswe Tlhakuli, a member of the South African National Defence Force (SANDF) based at the Makhado Air Force Base, is not too fazed about not making it to the 2021 World Triathlon Championship Series. Besides, he says, he can always try again next year.

The South African Triathlon Championships 2021 were held in Bloemfontein in the Free State with the sprint and Olympic distance triathlon races that took place less than 24 hours apart during March this year.

Tlhakuli, who is also the physical-training, sports, and recreational officer at the Makhado Air Force Base, said that he put in a lot of hard work to be selected for the South African Triathlon team that would participate in Bermuda later in the year.

“However, upon participating in both events, I finished fifth in the Sprint event and eighth in the Olympic distance event, missing the qualifying times by a mere 11 seconds,” he said. “My preparation was not as smooth as I would have wanted it to be, due to most (public) swimming pools being closed around Limpopo, so I went racing a little underprepared. I will try again in 2022 though, to make the team to represent South Africa at the World Championships.”

Tlhakuli, who is a cyclist, runner, and triathlete, said that the year 2020 had been an unforgettable year in terms of sports participation for sportsmen and -woman in the military. “The desire to compete is fuelled by the amount of work done when preparing for a competition, but due to the lockdowns, the whole world came to a standstill. Even the Olympic Games, which were supposed to be held in 2020, were postponed, along with so many other world events,” he said.

The Major had previously participated in two military games, which were held in Brazil (2011) and South Korea (2015).

“For the sportsmen and -women here at Makhado Air Force Base, there was a moment to reflect on what was happening around the world,” he said. “Sport and other activities were put on hold worldwide. This was the phase when many people lost their lives and source of income, while others had to grapple with the pressure of lack of any activities in their lives, and being in total lockdown.”

In 2018, he took part in the prestigious South African Triathlon Championships for the first time. His performance was good enough to earn him an invitation to form part of the national triathlon team that was to represent South Africa at the International Triathlon Union (ITU) World Championships. “Ever since that very first time, I have not looked back, for I know I possess the characteristics of a champion,” he said.

Tlhakuli is currently in training, preparing to participate in the Kruger2Canyon Challenge 2021 that will take place near Kampersrus, Hoedspruit, from 2 to 4 July this year. He will do the 70km Ultra Distance, run over two days.