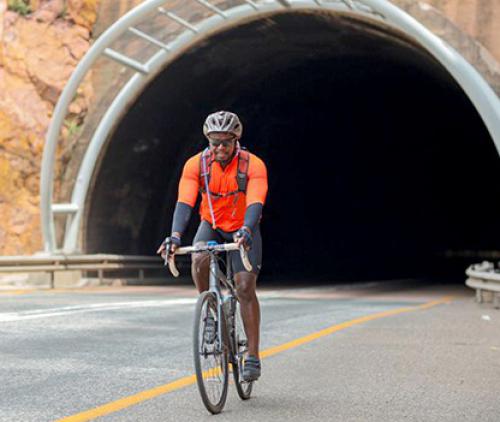 Nyiko Masango passes through the tunnels on the N1 between Musina and Louis Trichardt.

Nyiko cycling to promote the rights of fathers

Local resident, Nyiko Masango (40), known as Mr Dynamix, started a campaign aimed at encouraging men to be actively involved in their children’s upbringing.

Masango, who is a lifestyle coach, motivational speaker, photographer, ordained reverend, and an entrepreneur, said that not being able to spend time with his children was the hardest thing for him. “I was not allowed to see my children for a time and this actually was against my wish, prompting me to start an awareness campaign that fathers need to play an active role in the lives of their children,” said Masango.

His campaign is called Presence in Fatherhood and Fathers’ rights. The campaign advocates for children growing up without fathers, and for fathers who are denied the right to see their children after partners have passed away.

“Mr Dynamix” had just embarked on a 3 143 km cycling tour from Beitbridge to Cape Town, which started on Saturday, 21 November. The next day he cycled 125 km from Louis Trichardt to Tzaneen. Some seconds before 12:00 on Saturday, a smiling face pedalled up to the Makhado FM radio studio.

“This is the first stage of my cycling journey. Every day is a stage. I am expecting the whole journey to be completed in 27 days. I know tomorrow I will be in Tzaneen and people will support us by offering food of some sort,” Masango smiled confidently.

Besides the uphill parts of his journey, he said he had no challenges. “Limpopo Wildlife and Eastern Cape tourism assist with accommodation. Ripfumelo Pharmacy assists with supplements on medical care and Vodacom assists with cash.”

In the meantime, Masango said, he had plans to start a cycling academy.