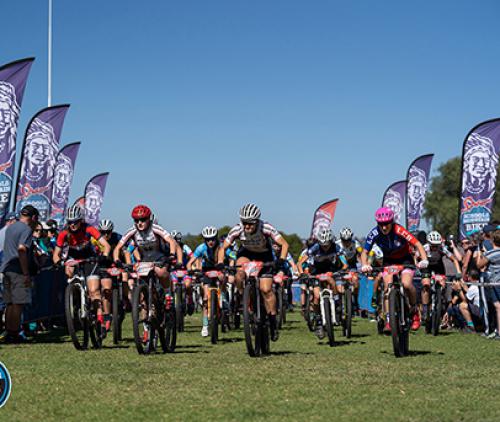 The finals will see more than 500 riders from the top-performing schools from all nine provinces going head to head to battle it out for the coveted title of Spur MTB champions in the various categories. Photo supplied.

The finals of the Spur Schools Mountain Bike League (SSMTBL), one of the most anticipated events on the South African mountain-biking calendar, will take place in the North West Province this weekend.

The fiercely contested 2019 season saw a record-breaking 18 757 entries during the regional trials and will conclude during the league finals at Wagpos High School outside Brits on 27 and 28 September. From Limpopo, Louis Trichardt High School, PHS, Stanford Lake College and Hatfield Christian School qualified for the finals.

After eight successful years at Bekker High near Magaliesburg, the Spur Schools Mountain Bike league is heading for a new venue for the 11th season of the competition.  Wagpos is no stranger to competitive mountain biking and has hosted numerous regional legs in the league in previous seasons.

According to league co-ordinator Meurant Botha, the new track at Wagpos has been totally redesigned from the North West events in past years. The track measures 4,2km and features 85m of elevation per lap.

“Firstly, a figure-of-8 design means that riders return to the finish area, which is great for spectators. A start loop of 700m and a wide first climb will ensure that the field is well spread out before the first tight sections. The first half of the course is tight and technical with two climbs, while the second half and finish area are flat. A flow line section with jumps will ensure that it’s not all hard work. All in all, the track is much more undulating and technical than previous years, in keeping with the progression of rider quality that the League has experienced,” explains Botha.

According to Khakhi Diala, Spur Group Sponsorship and Events Manager, the current season has exceeded all their expectations.  “The league was established to get more kids on bikes and this year’s turn-out has definitely validated our goal.  We are excited to see the culmination of a super exciting season consisting of 57 regional Spur MTB events, with the best teams showcasing their talents and representing their schools next weekend.”

The finals will see more than 500 riders from the top-performing schools from all nine provinces going head to head to battle it out for the coveted title of Spur MTB champions in the various categories.

Following the second successful Soweto MTB Challenge, which saw 14 schools taking part on Mandela Day in July this year, qualifying riders from several Soweto High Schools will be part of the pack as proof of the positive impact of cycling development.  Joining them will be the Exxaro-backed Tililo High School from Limpopo and the Tshwane Urban Riders.  They can expect a strong challenge from KZN, where a number of riders from the GO-Durban programme have achieved podium positions this season.

League ambassadors Ariane Luthi and Alan Hatherley will be attending the national finals to further inspire learners participating in the event.  Joining them will be Candice Lill, the reigning South African champion, who has had an exceptional international campaign in 2019. Diala explains that the ambassadors add another element to the event.  “Our ambassadors engage directly with the learners to share their wealth of knowledge and experience from an advisory perspective, which takes the attention off the competitive nature of the event and contributes more to social skills.  Candice will be attending the finals for the first time and we are confident that this is a perfect platform for her career achievements to inspire girls in the league,” mentions Diala.

For more information on the league, visit www.spurmtbleague.co.za, while overall results are available on www.trailtag.co.za. (Issued by Peridot Communications).