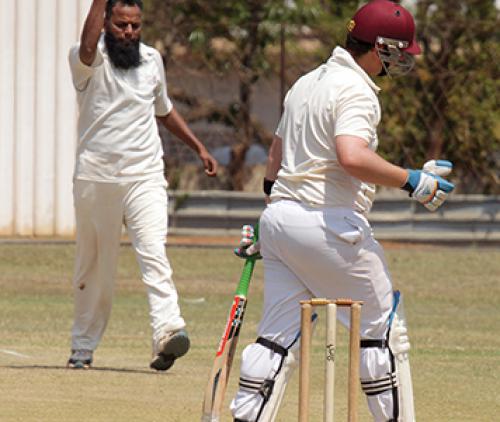 Louis Trichardt batsman Dirk van den Berg strolls back to the pavilion after being caught behind while Eltivillas players celebrate. Louis Trichardt lost their Vhembe T20 clash on Sunday against Eltivillas after a super over.

Louis Trichardt suffered a loss in their Vhembe T20 match on Sunday against Eltivillas but made amends later the same day by crushing the Univen team, while the latter also suffered a defeat at the hands of a well-performing Giyani side.

The Louis Trichardt/Eltivillas game was probably the best match to watch on Sunday. Eltivillas went in to bat first and managed a decent score of 139 runs before being bowled out.  Louis Trichardt had to chase down the score but although they were looking good at the start of their innings, the frequent fall of wickets soon had Louis Trichardt in a spot of bother. In the end, the match was decided by means of a super over, with Eltivillas clinching victory. (Because of technical problems, the game’s score card was not available at the time of our going to press).

At the same time that the above teams squared off at the Louis Trichardt Oval, Giyani and Univen came up against each other in Eltivillas.

Giyani batted first and put a good score of 149 runs for the loss of five wickets in their allotted 20 overs. The best-performing batsmen were opener Bongani Vhukeya (who put on 39 runs in 29 balls) and teammate Chavani Mathebula, who top scored with the bat by hitting 42 runs off 34 balls. On the other hand, Univen’s bowlers were struggling. Their five-wicket haul included two run-outs, with all the bowlers ending up with economy rates of 4 and above, the highest being 13.1.

As with their bowlers, Univen’s batsmen were also struggling, only managing 113 runs on the scoreboard before being bowled out in 12.5 overs. Initially, things looked good with openers Emmanuel Thokwane (20 off 21 balls) and Moien Gija (33 off 17 balls) laying the foundation. After their departure from the pitch, Univen’s batting line-up had little more to offer.

In the afternoon it was time for Louis Trichardt to make amends for their loss earlier in the day. They came back with a vengeance and, unfortunately, Univen was at the receiving end.

Louis Trichardt batted first, scoring an impressive 170 runs for the loss of nine wickets in their 20 overs. Top performers with the bat for the team were Leon Olwage (27 off 14 balls) and AJ Fourie, who finished on 45 not out off 34 balls. For Univen, their star bowler was Akib Amanji, who took 3 wickets for the loss of 16 runs in his four overs. He also boasted the team’s best economy rate of 4. The only other bowler to take more than one wicket was fellow bowler Tamin Kondivilkar, who took two wickets for 29 runs in 4 overs.

Univen put up a brave fight by almost batting out their whole innings, but their last wicket fell with only one ball to spare with the score on only 57 runs. Apart from Adeel Altaf Munshi, who struggled to 11 runs off 34 balls, no other Univen batsman could score double figures. For Louis Trichardt, bowler Gerhardus Fourie was in devastating form, taking 5 wickets for the loss of only 5 runs in his 4 overs. His spell included two maidens.

The next round of local Vhembe T20 matches will be decided this Sunday, 29 September. Univen will take on the Mohodi Cricket Club at the Louis Trichardt Oval at 10:00. At 14:30, at the same venue, Louis Trichardt will take on Giyani, while Mohodi will play their second match of the day against Eltivillas in Eltivillas.

One of Louis Trichardt’s star batsmen, Zander Vollgraaff, was looking good during the team’s match against Eltivillas on Sunday but had to return to the changing room after being bowled cleanly. Louis Trichardt lost the match after a super over.