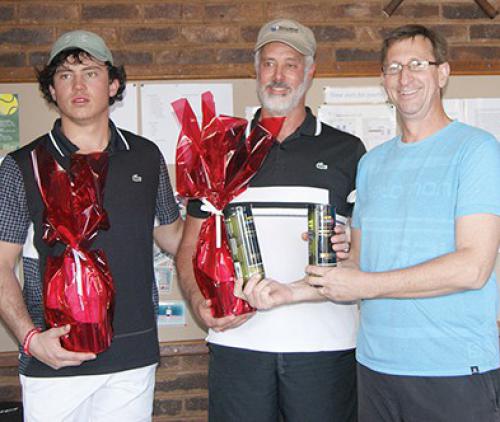 The two winners from Bela-Bela, Wynand and Jacques Bothma, with the trophy. On the right is the tennis club's vice-chairperson, Henk Beukes.

“In the past, this day was an annual event held and attended by many clubs in the region. Over the years, it died down, but the club decided to try and get this special day going again,” said the club’s chairperson, Henk Beukes.

The turnout for the event was excellent and even the weather played along nicely. “We are grateful for the big turnout, as even people from Mokopane and Bela-Bela attended the tournament,” said Beukes.

The doubles tournament was won by Wynand and Jacques Bothma, who beat the local team of Elardus du Plessis and Gysbert Guillaume in the final.

The following prizes were awarded at the end of the competition:

“Last but not least, to everyone who helped us clean up and get everything ready for our special day – a big thank you! Also, a big thanks to everyone who entered, watched, supported and enjoyed the day with us – we loved having you there and hope to see you again next year!”

The runners-up were Gysbert Guillaume (left) and Elardus du Plessis from Louis Trichardt. Vice-chairperson of the club Henk Beukes (right) handed out the prizes.