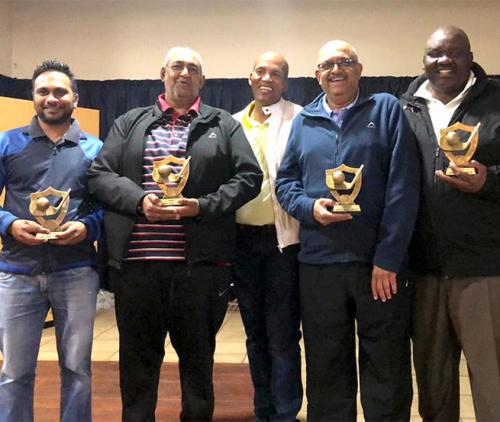 The winners of the SACM’s annual charity golf day hosted at the Soutpansberg Golf Club. The day was won by the Surat team. From left to right are team members Shahil Harri, Major Patel, Bandish Patel and Colbert Machumela. Standing in the centre (back) is Dumisani Nzimande (SACM Prison Director). Photo supplied.

The day attracted players from as far as Mpumalanga, North West and Gauteng, with 18 teams entering the 4-ball Stableford with two scores to count competition. Great fun was had by all and the day ended in a dinner and prize-giving function in the evening.

This year, top honours went to the four-man team from Surat. They won the day with 97 points, followed by the African Dawn team in second place and the GEO 1 team in third place, also with 96, after a count out.

Fourth-place finishers were the Marsh team with 95 points, followed by the SACM team in fifth place with 94 points and the team from PJ Timbers in sixth place, also with 94 points, after another count out.

Seventh place went to the team of Jandrell and Swanepoel with 92 points, followed by the GEO 2 team in eighth place with 91 points. The SIZWE team also scored 91 points, but after a count out they took the ninth place. The team of the Kutama Sinthumule Correctional Centre (KSCC) walked away with tenth spot with a score of 90 points, with Mapula Enterprises ending eleventh, also with a score of 90.